Home / Testimonials / Irish Arts Review by Will de Burca: THE HONORABLE JOHN J. BURNS LIBRARY OF RARE BOOKS AND SPECIAL COLLECTIONS, 1987-2013
<< Back to the Testimonials 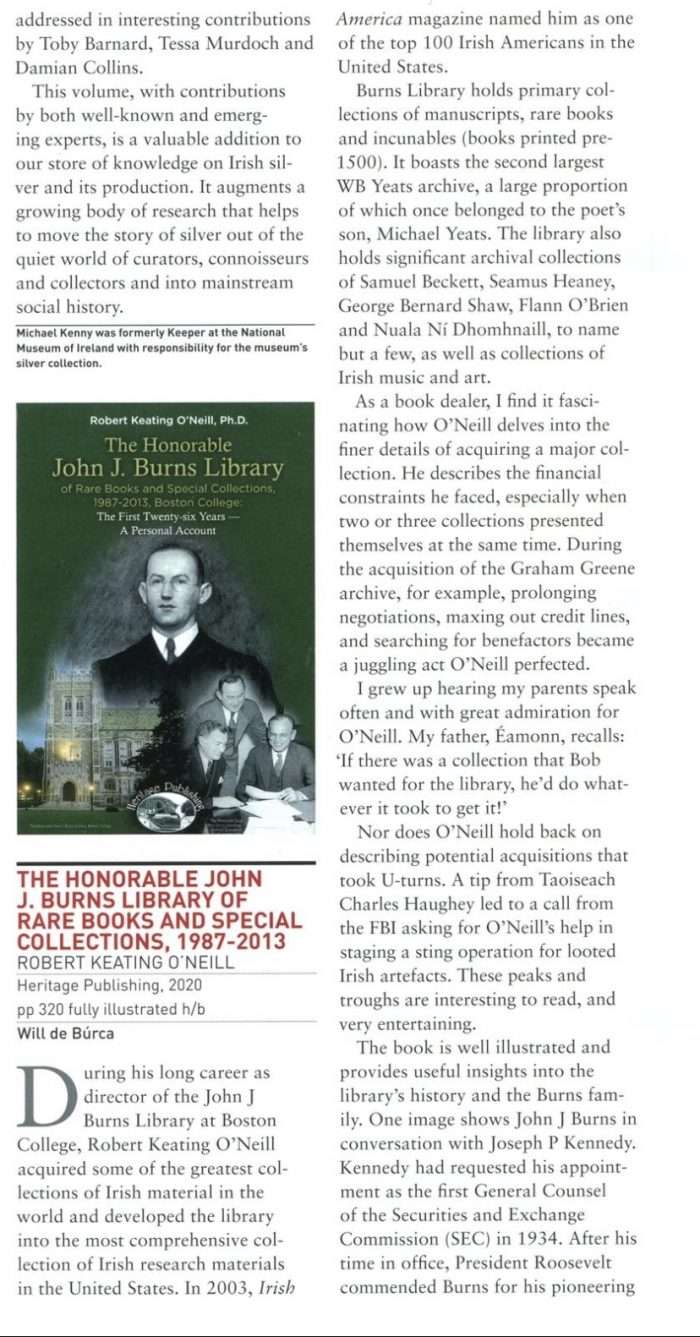 uring his long career as director of the John J Burns Library at Boston College, Robert Keating O’Neill acquired some of the greatest col lections of Irish material in the world and developed the library into the most comprehensive col lection of Irish research materials in the United States. In 2003, Irish

America magazine named him as one of the top 100 Irish Americans in the United States.

As a book dealer, I find it fasci nating how O’Neill delves into the finer details of acquiring a major col lection. He describes the financial constraints he faced, especially when two or three collections presented themselves at the same time. During the acquisition of the Graham Greene archive, for example, prolonging negotiations, maxing out credit lines, and searching for benefactors became a juggling act O’Neill perfected.

I grew up hearing my parents speak often and with great admiration for O’Neill. My father, Éamonn, recalls: “If there was a collection that Bob wanted for the library, he’d do what ever it took to get it!’

Nor does O’Neill hold back on describing potential acquisitions that took U-turns. A tip from Taoiseach Charles Haughey led to a call from the FBI asking for O’Neill’s help in staging a sting operation for looted Irish artefacts. These peaks and troughs are interesting to read, and very entertaining.

The book is well illustrated and provides useful insights into the library’s history and the Burns fam ily. One image shows John J Burns in conversation with Joseph P Kennedy. Kennedy had requested his appoint ment as the first General Counsel of the Securities and Exchange Commission (SEC) in 1934. After his time in office, President Roosevelt commended Burns for his pioneering service in ‘this great adventure in social organization’.

Burns’ son, Brian P Burns, contin ued in his father’s footsteps, playing a pivotal role in fundraising for the creation of Burns Library as well as the restoration of Marsh’s Library in Dublin and the establishment of a collection on American law at University College Cork in honour of his father. In 2013, he was inducted into the Irish America Hall of Fame along with then US Vice President, Joe Biden.

This book serves as a reminder of how many Irish immigrants rose so quickly and prominently to achieve the ‘American dream’. John J Burns’ parents hailed from Co Kerry and settled in America to see their son become a judge and a confidant to the Kennedys. He left behind a great legacy, and through the benefactions of his son, a great library, carefully documented by Robert O’Neill.

Will de Búrca is a Director of De Búrca Rare Books. 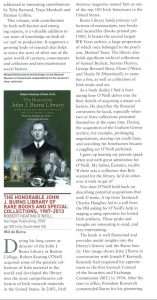