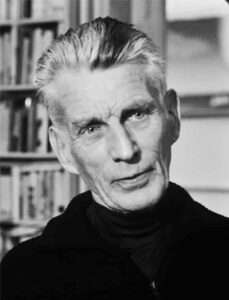 Samuel [Barclay] Beckett, poet, novelist, and dramatist was born in Foxrock, County Dublin in 1906. He was educated at Portora Royal School, Enniskillen and later at T.C.D. In 1928 he taught French at Campbell College, Belfast, before moving to Paris as a lecteur d’anglais at the Ecole Normale Sup‚rieure. It was here that he met through his friendship with Thomas MacGreevy, James Joyce. One of the major figures of modern Irish literature, Beckett was awarded the Nobel Prize in 1969. He died in Paris in 1989.

Samuel Beckett’s family home was in Foxrock Co. Dublin near the Leopardstown race cource. His parents were both 35 when he was born.  Beckett was a member of the Church of Ireland but later became agnostic, clearly shown in his writings.In 1920, he attended Portora Royal School in Enniskillen, also attended by Oscar Wilde. In 1923 he entered Trinity College in Dublin and studied literature and excelled playing cricket, later playing for Dublin University.

Samuel Beckett’s notable works include Murphy, Watt, Molloy, Malone Dies, The Unnamable, Waiting for Godot, Endgame, Krapp’s Last Tape, How It Is, Happy Days. Beckett won the 1969 Nobel Prize in Literature, While not rejecting the prize, Beckett did not attend the prize ceremony, nor did he deliver a Nobel lecture. His wife described his reaction to the news that he had been awarded the Nobel Prize in Literature as a “catastrophe”. He donated the prize money, much of it to Trinity College, Dublin.

Samuel Beckett died on the 22nd of December 1989 in Paris. In 1983, the Samuel Beckett Award was established for writers who, in the opinion of a committee of critics, producers and publishers, showed innovation and excellence in writing for the performing arts. On 10 December 2009, the new bridge across the River Liffey in Dublin was opened and named the Samuel Beckett Bridge in his honour. The Central Bank of Ireland launched two Samuel Beckett Centenary commemorative coins on 26 April 2006: €10 Silver Coin and €20 Gold Coin.