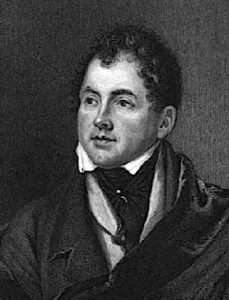 Thomas Moore (1779-1852), poet, composer and prose writer was born in Dublin. Educated at Samuel White’s Academy and T.C.D., from which he graduated B.A. in 1798. While at T.C.D. he formed a close friendship with Robert Emmet on whose execution in 1803 he wrote: “Oh! Breathe Not His Name”. He was a friend of Lord Byron, a strong advocate of Catholic Emancipation and supporter of Daniel O’Connell.

Sloperton Cottage near Devizes, Wiltshsire, was Moore’s home from 1817 till his death in 1852: “That dear home, that saving ark, where love’s true light at last I’ve found, cheering within when all grows dark, and comfortless, and stormy around”.

Thomas Moore, moved up the ranks of society after moving to London to study law. He became famous for his ballads, melodies and poems, and set about writing a biography of Richard Brinsley Sheridan. This large collection, dedicated ‘To Ireland’, includes: The Odes of Anacreon; Juvenile Poems; Odes and Epistles; Corruption and Intolerance; The Sceptic; The Twopenny Post-Bag; Songs from M.P. or the Bluestocking; Irish Melodies; National Airs; Sacred Songs; Lalla Rookh; The Fudge Family in Paris – in England; Rhymes on the Road; Fables for the Holy Alliance; The Loves of the Angels; Evenings in Greece; Verses from the Epicurean; Cash, Corn and Catholics; Legendary Ballads; The Summer Fete; Songs and Ballads; Set of Glees; Songs from the Greek Anthology and Miscellaneous Poems.

We did not know of any connection between Thomas Moore and the Tsars of Russia until we had an enquiry some years ago for a first edition of ‘Lalla Rookh’. Our customer informed us that it was going to the Summer Palace of the once mighty Romanoffs. Seemingly Tsarina Alexandra, Consort of Tsar Nicholas I, loved Thomas Moore’s work and her favourite book in all the world was this classic oriental romance. It took pride of place in the Summer Palace Library at Peterhoff.
The Tsarina Alexandra is still venerated and her birthday is celebrated each year on the 12th of July in St. Petersburg. The streets are strewn with white roses and parts of ‘Lalla Rookh’ are re-enacted.
This work was a bestseller in the early nineteenth century. In six months it ran into six editions, and into as many European translations. Its appearance in Persian inspired the playful verse:
‘I’m told, dear Moore, that your lays are sung
Can it be true, you lucky man!
By moonlight in the Persian tongue
Along the streets of Ispahan’.

First edition of Thomas Moore’s famous poem Lalla Rookh. The title of this Oriental romance is taken from the name of the heroine of the frame tale, the daughter of the 17th-century Mughal emperor Aurangzeb. The work consists of four narrative poems with a connecting tale in prose.
Engaged to the young king of Bukhara, Lalla Rookh goes forth to meet him, but falls in love with Feramorz, a poet from her entourage. The bulk of the work consists of four interpolated tales sung by the poet: “The Veiled Prophet of Khorassan” (loosely based upon the story of Al-Muqanna), “Paradise and the Peri”, “The Fire-Worshippers”, and “The Light of the Harem”. When Lalla Rookh enters the palace of her bridegroom she swoons away, but revives at the sound of a familiar voice. She awakes with rapture to find that the poet she loves is none other than the king to whom she is engaged
This work was a bestseller in the early nineteenth century. In six months in 1817 alone it ran into six editions, and into as many European translations, by 1842 no less than thirty. Its appearance in Persian inspired the playful verse:
‘I’m told, dear Moore, that your lays are sung
Can it be true, you lucky man!
By moonlight in the Persian tongue
Along the streets of Ispahan’.