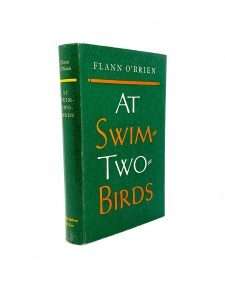 O’BRIEN, Flann [Myles na gCopaleen] At Swim-Two-Birds. London: MacGibbon & Kee, 1960. Large post octavo. Second edition. pp. 315, [1]. Black papered boards, title in gilt on
spine. A very near fine copy in near good dust jacket.
Brian O’Nolan (1911-1966), novelist, journalist, short story writer, playwright and humourist was a native of Strabane, County Tyrone. He was better known by his pseudonyms Flann O’Brien, Myles na gCopaleen, but he also had other pseudonymic incarnations: Brother Barnabas, George Knowall, Count O’Blather, and John James Doe. His most celebrated novel ‘At Swim-Two-Birds’ was published in 1939, was hailed critically, and much relished by James Joyce, but it sold poorly. In 1960, the re-issue of ‘At Swim-Two-Birds’ brought tremendous success, restored his confidence, and he went on to produce more best-selling novels.
“One extremely funny one-man symposium on Irish literature. It shows as one of the very, very few books to have successfully drawn some kind of inspiration from Ulysses.” The Spectator.