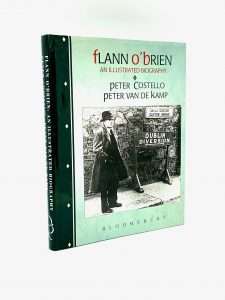 Bloomsbury Publishing: 1988. Quarto. 160 pp. Signed by the author "Peter Costello, Christmas 1987" Under many pen-names, including that of Flann O'Brien, Brian O'Nolan was a legend among Irish writers, creating his famous novel "At Swim-Two-Birds" while still a student, contributing a column to the "Irish Times" for a quarter of a century, and in the last days of his life making a spectacular return as a novelist. Even after his death, he had a surprise in store, for he left behind what many now consider to be his masterpiece, "The Third Policeman". Drawing on extensive personal material which has never been seen before, and with the full co-operation of Evelyn O'Nolan, the writer's widow, the authors unravel some of the mystery surrounding the man described by James Joyce as "a real writer, with the true comic spirit". The book is illustrated with more than 150 photographs, paintings, drawings and facsimile manuscripts. Peter Costello is a literary historian and biographer who lives in Dublin and has published books on James Joyce and Jules Verne. Peter van de Kamp is an authority on W.B.Yeats.