IRVING, Washington Bracebridge Hall. Illustrated by R. Caldecott. London: Macmillan & Co., 1887. Crown octavo. pp. xiv, 284, [4 (Advertisement)]. Original blue cloth spine and front board elaborately decorated in gilt with a handsome design in gilt of a young lady seated beside a tree. Bookplate of Egerton Castle on front pastedown. All edges gilt. A very good copy. Washington Irving’s collection of essays, verbal sketches and tales, centred around the eponymous Alhambra Palace in Granada, the illustrated Pennell edition. The illustrations by Pennell are particularly admired. The Alhambra has its origins in Irving’s researches for his history A Chronicle of the Conquest of Granada. He travelled to Granada, where he managed to obtain access to the Alhambra palace from the governor. He was inspired by his stay there to write this work, which combines description, myth, and narrations of historical events, all the way up to the peninsular wars and the earthquake in 1821. The book was first published in 1832 in the United States and England. It was highly influential, and this later limited edition is a testament to its enduring popularity. Cranford series. One of Pennell’s finest achievements in book illustration, and the artist’s earliest significant work in lithography. 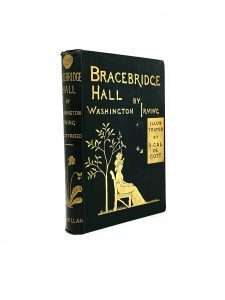