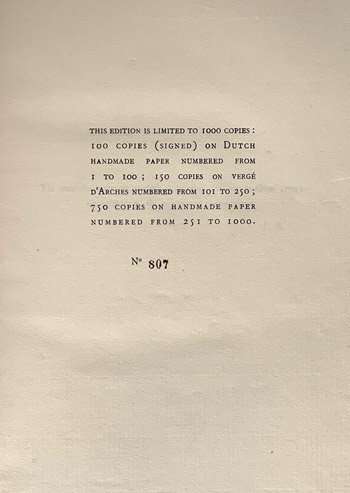 Paris: Shakespeare and Company, 1922. First edition. Finely rebound in recent full blue morocco, double gilt rule to spine and boards, board edges and dentelles, top edge gilt, original blue printed wrapper bound in. No. 251 of 750 copies on hand-made paper numbered from 251 to 1000. Fine in matching morocco slipcase.
Arguably the greatest of modernist writers, James Joyce was a comic genius, a formal innovator, and an unsentimental poet of Irish life and language. He pioneered the use of inner-monologue and stream-of-consciousness techniques, and made brilliant use of such devices as parody and pastiche. 'Ulysses', Joyce's mock-heroic epic novel, celebrates the events of one day (16 June, 1904) in the lives of three Dubliners and is modelled on episodes in Homer's 'Odyssey'. The central characters, Stephen Dedalus, Leopold Bloom, and his wife Marian (Molly), correspond to Telemachus, Ulysses, and Penelope.

This June day is known to Joyceans throughout the world as 'Bloomsday' . The first edition was published in Paris on Joyce's fortieth birthday (2 February, 1922). 'Ulysses' is a landmark in twentieth-century literature, and one of the most famous and celebrated in modern literature. Written over a seven-year period in three different cities, it has survived legal action, bitter controversy and persistent misunderstanding. Literature, as Joyce tells us through the character of Dedalus is: ""the eternal affirmation of the spirit of man""."