JOYCE, James. Ulysses. Edited with a Preface by Danis Rose. Introduction by John Banville. 144 Dublin: The Lilliput Press, 1997. The first edition of this title produced in Ireland. Royal octavo. pp. lxxxiii, [1], 739, [2]. Blue cloth, title in gilt on black panel on spine. Limited to 1000 numbered copies. Copy No. 735. A fine copy in a fine slipcase. Back "This is the first printing of Joyce's masterpiece to be published in Ireland - 75 years after its initial publication. Generally recognized as the most important twentieth century novel in English, Joyce's chronicle of Leopold Bloom's odyssey through Dublin excited much controversy upon publication in 1922 and was for years a target of censorship, especially in Ireland, England and the U.S. The present edition also met with some animosity when it was discovered that the editor, prominent Joyce scholar Danis Rose, used some language from the original manuscripts without permission from Joyce's estate. A lawsuit for copyright infringement was issued, and this work subsequently became known as the ""Illegal Edition."" Despite the unpleasant dispute, Rose's ""Ulysses"" was lauded for its readability, and was described by the Irish Times as ""a landmark edition for first-time readers and life-time fans." JOYCE, James. 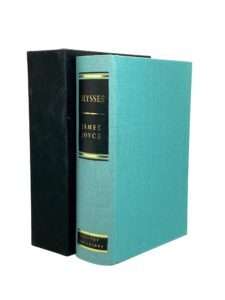