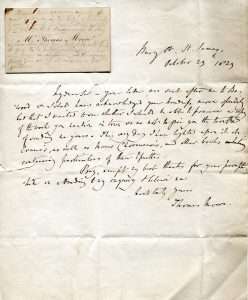 MOORE, Thomas. Autographed letter signed from Thomas Moore, dated October 29th, 1829, from King Street, St. James’s, London, to Rev. Millman, St Mary’s, Reading, with integral address panel and stamp. One page quarto. He writes about procuring books for Rev. Millman and on his calling card attached to the letter declines an invitation to dinner. Grattan’s signature on the address panel enabled the letter to be carried free of charge, an abuse of the privilege he had as a Member of Parliament. Small tear where wax seal was removed, otherwise in very good condition.
Henry Hart Milman (1791-1868) English historian and ecclesiastic was born in London, third son of Sir Francis Milman, 1st Baronet, physician to King George III. Educated at Eton and at Brasenose College, Oxford, his university career was brilliant. He won the Newdigate prize with a poem on the Apollo Belvidere in 1812, was elected a fellow of Brasenose in 1814, and in 1816 won the English essay prize with his Comparative Estimate of Sculpture and Painting. In 1816 he was ordained, and two years later became parish priest of St Mary’s, Reading. In 1821 he was elected professor of poetry at Oxford; and in 1827 he delivered the Bampton lectures on The character and conduct of the Apostles considered as an evidence of Christianity. In 1835, Sir Robert Peel made him Rector of St Margaret’s, Westminster, and Canon of Westminster, and in 1849 he became Dean of St Paul’s. He was elected a Foreign Honorary Member of the American Academy of Arts & Sciences in 1864.