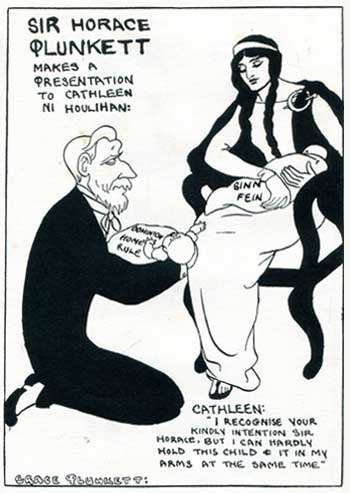 Grace Vandeleur Plunkett (née Gifford), one of a family of twelve children, was born in Dublin in 1888; daughter of a Catholic father, Frederick Gifford, and a Protestant mother. Both her parents were Unionists. Together with her brother Gabriel she attended the Dublin Metropolitan School of Art where she studied under Sir William Orpen, before moving to the Slade School of Fine Art in London. She returned to Dublin in 1908 and, with great difficulty, tried to earn a living as a caricaturist, publishing her cartoons in The Shanachie, Irish Life, Meadows Sreet and The Irish Review, which was edited from 1913 by Joseph Plunkett. She considered emigrating but gave up the idea. Despite earning so little money, she enjoyed a lively social life; she was well dressed and mixed with the likes of Mrs Dryhurst, a journalist who worked in London, and George William Russell (Æ). During the same year, Mrs Dryhurst brought Grace to the opening of the new bilingual St Enda's School in Rathfarnham. It was here that she first met Joseph Plunkett and came into direct contact with the future leaders of the 1916 Easter Rising, including Tomás MacDonagh, whom Grace's sister, Muriel, married.

Her growing interest in the Roman Catholic religion led to the deepening of her acquaintance with Joseph Plunkett. She began to question him about his faith. He proposed to her in 1915; Grace accepted and decided to take instruction in the Catholic religion. She was formally received into the Catholic Church in April 1916. Having no knowledge of the plans for the Easter Rising, she planned to marry Joseph on Easter Sunday of that year in University Chapel on St Stephen's Green, in a double wedding with his sister and her fiancé. Her parents were not in favour of her marrying Plunkett, due to the precarious state of his health - he was extremely ill at this time.

After the Rising, the leaders were condemned to death by firing squad. When Grace knew that Joseph was due to be shot on 4 May, she bought a wedding ring in a jeweller's shop in Dublin city centre. She and Joseph were married on the night of 3 May in the chapel of Kilmainham Jail, only a few hours before he was executed.

Grace Plunkett decided to devote herself through her art to the promotion of Sinn Féin policies and resumed her artistic work in cartoons, posters and banner to earn a living. She was elected to the Sinn Féin executive in 1917. Her sister Muriel, widow of executed 1916 leader Thomas MacDonagh, died of heart failure while swimming in 1917. She died in 1955.