IN FINE BINDING WITH WOODCUTS AFTER THE PRE-RAPHAELITES 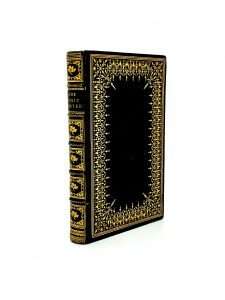 chipping to a few margins. All edges gilt. A very attractive copy. The first edition of Irish poet William Allingham’s (1824-1889) long narrative poem, a notable volume in the history of book illustration for the inclusion of woodcuts (executed by the Brothers Dalziel) by Pre- Raphaelite Brotherhood artists Dante Gabriel Rossetti, John Everett Millais, and Arthur Hughes, that would greatly influence the artists of the sixties. So unfamiliar was Rossetti with the reproductive process perfected by the Dalziels, that he neglected to reverse his first design on wood and had to painstakingly redraw his astonishing contribution ‘The Maids of Elfen-Mere’ on a fresh block. The bold design of the resulting illustration later inspired the likes of Edward Burne-Jones, Frederick Sandys, and Walter Crane.