BARCLAY, John. Barclay his Argenis. Or, The Loves of Polyarchus & Argenis. 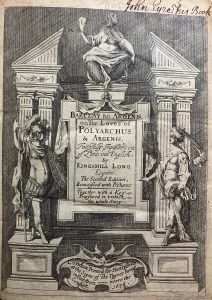 BARCLAY, John. Barclay his Argenis. Or, The Loves of Polyarchus & Argenis. Faithfully Translated out of Latin into English by Kingsmill Long, Esquire. The Second Edition, beautified with pictures together with a key praefixed to unlock the whole story. London: Printed for Henry Seile at the Signe of the Tygres Head in Fleetstreet - neere the Conduit, 1636. Quarto. pp. [36], 719, [1]. Engraved titlepage. Modern full calf in seventeenth century style. Early signature of John Eyre on titlepage. All edges red. A very good copy.  "ESTC S100846 with no copy in Ireland.

The ownership inscription is very interesting and may very well be that of John Eyre (died 1685) a Cromwellian settler in Ireland who became Mayor of Galway. Eyre was born in Wiltshire, England, in the early 17th century, the son of Giles Eyre and Jane Snelgrove. John and his younger brother Edward were officers in the forces of the Parliament, John rising to the rank of major. In 1649 the brothers arrived in Dublin as part an invasion force of 12,000 men led by Oliver Cromwell. They saw service mainly under the command of Edward Ludlow.

Eyre is mentioned as one of the officers with Ludlow when he arrived at Galway in 1651. With the surrender of the town in April 1652 the war ended, and the brothers began securing much property seized from Irish Roman Catholics, within the town and also in other parts of County Galway. Much land was made over to Cromwellian officers who were owed substantial pay arrears. Eyre's main landed estates were in the south-east of the county, dispossing families such as Kelly, Madden, Horan, and Burke. In this area, known in Irish as Síol Anmchadha, Eyre created the town of Eyrecourt and his main residence.

This would continue to be the home of generations of the family.

The illustrations are plates by Claude Mellan and Leonard Gaultier, first used in the French edition of 1623." BARCLAY, John. 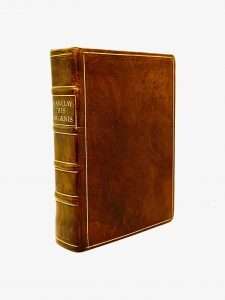