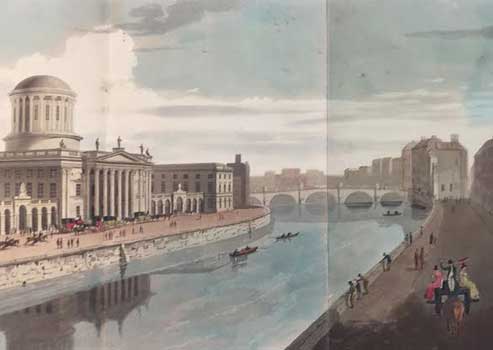 A Tour in the Southern and Western Parts of that Country, in the year 1805. With 16 folding hand-coloured aquatints and engraved map of the Lakes of Killarney. London: Printed for Richard Phillips, No. 6, Bridge-Street, 1806. Quarto. pp. xv, [2], 530, 16 (plates). Contemporary full tree calf. Flat spine divided into six compartments by gilt chain-link roll, gilt fillets and dotted lines, title in gilt on recent morocco label in the second compartment, the remainder tooled in gilt to a neo classical design. All plates in magnificent hand-colouring. A fine copy.

Sir John Carr (1772-1832), a native of Devonshire, was called to the Bar at the Middle Temple, but for health reasons found it advisable to travel and published accounts of his journeys in different European countries. Carr's 'Stranger in Ireland' is a lively account of his impressions and experiences during his travels throughout the country in the year 1805. He supplemented his own experience with extensive reading of the works on this country available at that time. Of particular interest and value are his descriptions and accounts of County Wicklow, Killarney, Dublin, Cork, Limerick and Kilkenny, illustrated with sixteen magnificent hand-coloured aquatints. It was a very popular work and 1,500 copies were sold of the first edition, this was followed by French and American editions. So successful were his previous works that the publisher, Phillips, paid Carr £600 in anticipation of its success. He was knighted by the Lord Lieutenant of Ireland, the Duke of Bedford.