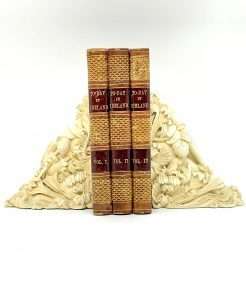 This work contains four stories: 'The Carders' is set at Rathfinnan on Lough Ree, not far from Athlone. It paints a very dark picture not only of the peasants and their secret societies but also of the Ascendancy class; 'Connemara' a burlesque tale of how M'Laughlin, a sort of King of Connemara, escapes his debtors in a coffin. There are some smuggling adventures and also a description of the fair of Ballinasloe; 'Old and New Light' a satirical study of Protestant religious life at Ardenmore, County Louth; 'The Toole's Warning' is set in the picturesque part of Ireland, the county of Wicklow, during the Cromwellian period. A young married gentleman decides to purchase a property (Clonmorth) near to Lough Dan from a gentleman of the Toole clan. The house turns out to be haunted and one of the rooms had not been opened for over twenty years.