CUSACK, Mary Francis. An Illustrated History of Ireland: from the Earliest Period. 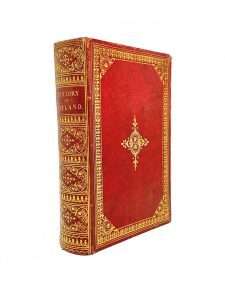 CUSACK, Mary Francis. An Illustrated History of Ireland: from the Earliest Period. With historical illustrations by Henry Doyle. With coloured half-title and three folding maps. 131 "London: Longmans, Green, 1871. Fifth edition. pp. [vi], 671. Bound in contemporary full red morocco. Covers framed by double gilt fillets and a wide gilt acanthus roll with an inner dotted fillet and fleurons at corners, enclosing in the centre a gilt lozenge. Flat spine divided into five compartments by double gilt fillets and a gilt floral roll, title in gilt direct in the second, the remainder tooled in gilt to a centre-and-corner design; board edges and turn-ins gilt; cream endpapers; red and gold endbands.

Rathcliffe College prize label on front pastedown, name of recipient erased. All edges gilt. Some light wear to extremities. A very attractive and desirable copy." Margaret Anne Cusack (1832-1899) social activist, feminist, writer was born into an aristocratic background in Dublin. She became an Anglican nun in London, later (1858) converting to Catholicism. She joined the Poor Clares, taking the name Mary Francis, in Newry and afterwards spent some time working in the famine-stricken region of Kenmare, County Kerry where the fund she founded for the destitute peasantry raised £20,000. A woman before her time she was misunderstood and reviled and became embroiled in quarrels with the hierarchy in various parts of Ireland. 1868 CUSACK, M.F.