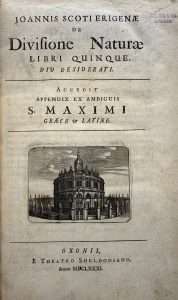 Exceedingly rare first edition of Erigena's magnum opus: ""The one important philosophical thinker to appear in Latin Christendom between Augustine in the fifth century and Anselm in the eleventh"".

John Scotus Erigena was born in Ireland about 810 and educated there. The greatest Irishman abroad of the ninth century, famous as linguist, philosopher and Greek scholar. Around 845 he was head of the Palace School at the court of Charles the Bald in France. His translation of the Pseudo-Dionysius from the Greek astonished the Papal librarian. While all around him, his contemporaries were content to try to understand their faith and to grasp the rudiments of knowledge, John ventured on new paths. Where his fellows hardly looked beyond the elementary questions of theology, contained in the writings of the Fathers, and kept within the bounds of the 'trivium', John constructed an entire system largely under the influence of Greek thought. At a time when the world around him limited itself to Latin culture, he took in that of Greece as well. The immediate consequence of this contact was the composition between 864 and 866 of Erigena's work, the 'De Divisione Naturae', in which the Western and Eastern forms of Neoplatonism are synthesized within a Christian context. It is accompanied here by his translation of the 'Scholia Maximi' in 'Gregorium Theologum' which also appears in print for the first time. Professor John O'Meara writing on 'Impassioned Intellectualism: or, The Irish and Neoplatonism' in Long Room 1992 states: ""Although his writing is in Latin and his material is for the most part dictated by the great Master Augustine, its real inspiration and effective character comes from the Greek."" He goes on to say that his speculation: ""was intellectual, subtle, allegorical, mystical"". He has been described as: ""One of the most striking personalities in the world of culture and learning in the early Middle Ages"". For an Oxford imprint of the second half of the seventeenth century this is a surprisingly rare book. New Wing, J747, records only the William A. Clark, Harvard, Minnesota University, and Cushing Library (Yale) copies in the U.S.A." 1681 ERIGENA Johannes Scotus.