LODGE, John Esq. The Peerage of Ireland, or, A Genealogical History of the Present Nobility of that Kingdom

LODGE, John Esq. The Peerage of Ireland, or, A Genealogical History of the Present Nobility of that Kingdom. With engravings of their paternal Coats of Arms. Collected from the Public Records; authentic Manuscripts; approved Historians; well-attested Pedigrees; and personal Information. Revised, enlarged and continued to the present time by Mervyn Archdall, Rector of Slane. With list of subscribers. Seven volumes. 140 THE SCARCE BEST EDITION Dublin: James Moore, 45 College Green, 1789. Bookplates of Catharine F. Boyle and Richard M. England. Early signature of Elizabeth Sheilds, Woodpark on titles. Contemporary full tree calf. Spines professionally rebacked at the Abrams Bindery. All edges green. A very good set. Rare.  "Mervyn Archdall is to Lodge, what Harris was to Ware, in as much as he revised and greatly expanded the work from four to seven volumes taking four years to complete his edition. Many of Lodge's valuable notes were left in cipher, and the credit for decoding them lies with Mrs. Archdall, a remarkable woman, who enabled her husband to carry out his extension of this work.
Mr. Rowley Lascelles in his compilation of the Liber Munerum drew largely from John Lodge's collection of manuscripts of the Patent and Close Rolls." LODGE, John Esq. 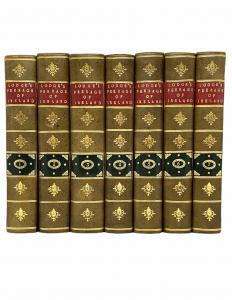