MORYSON, Fynes. An Itinerary Written by Fynes Moryson Gent. First in the Latine Tongue, and then translated by him into English. Containing his Ten Yeeres Travell through the Twelve Dominions of Germany, Bohmerland, Switzerland, Netherland, Denmarke, Poland, Italy, Turky, France, England, Scotland, and Ireland. 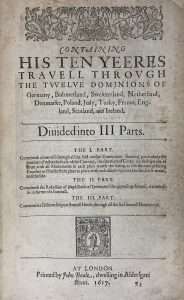 EYEWITNESS ACCOUNT OF TYRONE'S REBELLION MORYSON, Fynes. An Itinerary Written by Fynes Moryson Gent. First in the Latine Tongue, and then translated by him into English. Containing his Ten Yeeres Travell through the Twelve Dominions of Germany, Bohmerland, Switzerland, Netherland, Denmarke, Poland, Italy, Turky, France, England, Scotland, and Ireland. Divided into III parts.  London: Printed by John Beale, dwelling in Aldersgate street, 1617. First edition. Folio. pp. [1 (first blank but for sig.)], [13], 295, [85 numbered 59], [1], 301 [1] ; 292. Roman letter, double-page printed title, large historiated woodcut initials, text ornaments, head and tail pieces, woodcut entablature on versos of first leaf and title, latter containing the author's privilege with Royal Arms above. Eight woodcut maps and plans of Venice, Naples, Rome, Genoa, Paris, Jerusalem, Constantinople & of the Church of the Holy Sepulchre, full-page printed comparative table of English and Scottish weights and monies. Bound at the Abrams Bindery in modern full brown morocco to a seventeenth century panel design. Spine divided into seven compartments by six thick raised bands; title and author in gilt direct in the second compartment. Red and gold endbands. Early paper repair to inner margin of half title. Occasional light spotting to prelims, otherwise a very good copy.  18205 Sweeney 3118. Fynes Moryson (1566-1630), a Cambridge graduate, humanist and European traveller, was born in Lincolnshire. While on a visit to his brother, Sir Richard, at Dundalk, where he was Governor, George Cranmer, chief secretary of Sir Charles Blount, Lord Mountjoy and Lord Deputy of Ireland, was killed (November 13, 1600) at Carlingford, and Moryson was at once appointed to replace him. Published posthumously, it is one of the great early seventeenth century works of its kind. Lowndes 1621 terms it ""A valuable and much esteemed work"". The work comprises three distinct parts. The first contains a description of Moryson's travels, the cities and countryside through which he passed, his opinion as to the relative merits of numerous castles, churches, monuments, etc., the route and method of his journey, the mileage covered, the money and time expended, and the standard of the inns and post houses at which he stayed. In the second part Moryson devotes 302 pages to Ireland. Principally an account of Hugh O'Neill's, Nine Years War, 1594-1603, a campaign which proved to be a brutal struggle rather than an easy victory. Employing state documents to which the author in his official capacity had access, he provides an outstandingly candid and detached firsthand account of the affairs and state of Ireland in the years around the close of the sixteenth century. The last part could be retitled 'Handy Hints for Travellers'. There Moryson discourses on the advantages of travel, the preparation necessary for journeying, the languages one should know, where it is safe to travel and where not, the customs of different places, their trade, agriculture and legal systems, how to avoid giving offence to the locals, differences in money, costume, and the behaviour of and various attitudes towards women. He concentrates particularly on food and drink, giving detailed descriptions and comparisons of diets, wines, beers and spirits (including a full three pages on 'the English diet' of which he was very complimentary). ""Moryson is a sober and truthful writer ... he delights in statistics representing the mileage of his daily journeys and the varieties in the values of coins he encountered. His descriptions of the inns in which he lodged, of the costume and the food of the countries he visited, render his work invaluable to the social historian"" DNB." MORYSON, Fynes. L1BC 2C "STC