MUSGRAVE, Sir Richard. Memoirs of the Different Rebellions in Ireland from the Arrival of the English. 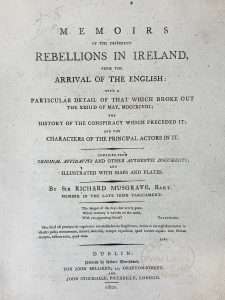 A Particular Detail of that which Broke Out the XXIID of May 1798. With a History of the Conspiracy which preceded it. To this edition is added A Concise History of the Reformation in Ireland and Considerations on the Means of Extending Its Advantages Therein. Illustrated with ten folding engraved maps. Dublin: Printed by Robert Marchbank for John Miliken, 32 Grafton-Street and John Stockdale, Piccadilly, London, 1801. Quarto. First edition. pp. x, 636, 210, 8 (index), + errata. Contemporary full calf, spine richly gilt. A very good copy.

Sir Richard Musgrave (1746-1818) was born into a Protestant gentry family in County Waterford. While nothing of his career as an M.P. was particularly remarkable it is his political ideology that has acquired a great deal of interest. The area where Musgrave grew up saw a great deal of agrarian upheaval, in the form of the Whiteboys and Rightboys, in the latter half of the eighteenth century. This unrest influenced Musgrave in his political outlook including his position on the Catholic population.

His 'Memoirs of the Different Rebellions in Ireland' is recognised as a seminal history of the 1798 Rebellion. It argues, controversially that the Rebellion was an attempt by Catholics, under the influence of the clergy, to eliminate Protestant 'heresy' in Ireland by eliminating the Protestant population. Lowndes dismissed this work as "a party work, abounding in misrepresentation". Musgrave, however, points out that although "some obloquy and abuse" had been levelled against the book and its author, he had been assured by the officers involved in the campaigns that his "military transactions have been accurately transcribed". The first edition of 1250 copies sold so quickly that the author realised he was on to a good thing. In his second edition there is much new material added, mostly in the appendix and also 'A Justification for Having Published this Work'. In this he criticises the English "It is a positive fact, that the mass of the people of England are as ignorant of the real state of Ireland, and of the causes of her disturbances and insurrections, as they are of the most remote regions in the torrid and frigid zones".