THE GENEROUS SPIRIT OF ROBERT BOYLE 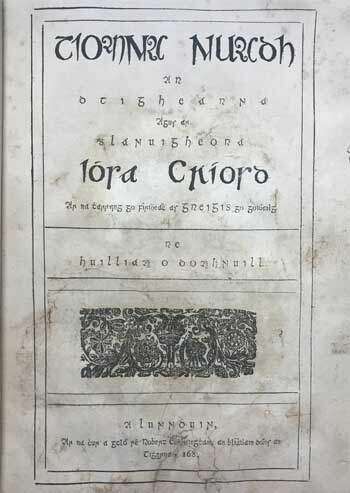 Ó DOMHNUILL, hUilliam. Tiomna Nuadh ar dTighearna Agus ar Slanuigheora Íosa Críosd Ar na Tharruing go Fíríneach as Ghreigis go Goidheilg. A Lunnduin, ar na chur a gcló ré Robert Ebheringham, an blíadhain dróis an Tigherna, 1681. Quarto. pp. [xviii], 364 (double column). Bound in contemporary full panelled calf; spine sympathetically rebacked. Old damp-staining and occasional foxing. Old paper repain to lower right-hand corner of p. 153/4 with minute loss. A good copy of an extremely rare book. "Darlow & Moule 5533; Delaveau & Hillard 4344; Wing B2759C. ESTC R211460 with 3 locations only in Ireland. Sweeney 416. A variant of the edition with imprint giving Benjamin Tuck as bookseller.
William O'Domhnuill (d.1628), Archbishop of Tuam was a native of Kilkenny and his name appears in the patent (3 March 1592) for the foundation of Trinity College, Dublin. It was while at that College that William took up the work of translating The 'New Testament' - 'Tiomna Nuadh' into Irish. This work was begun by Nicholas Walsh, Bishop of Ossory, who was murdered in 1585, and afterwards it was continued by John Kearney (who translated and published the first Irish Catechism, printed in Dublin in 1571), and Nehemias Donellan, Archbishop of Tuam in 1595. In the preface which is in Irish and English, Andrew Sall tells us: ""out of a pius Zeal, have taken great Care and Pains to have the Holy Scripture published in the Irish Tongue. Such we find to have been John Kearney, sometimes Treasurer of St. Patrick's Church in Dublin; Nicholas Walsh Bishop of Ossory, Nehemias Donellan, and William Daniel, both Archbishops of Tuame, by the help of others skilful in that Language; the Province of Connaught, and Sir William Usher, Clerk of the Council, bearing the Charge of the first Edition of the New Testament in Irish. And now that Edition being worn out with Time, and very few Copies thereof to be found, God has raised up the generous Spirit of Robert Boyle"".

The second edition of the 'Tiomna Nuadh', called Boyle's Testament, was printed from the text of the first edition. Both Testaments were printed in an edition of about 500 copies. The typefonts used for the 1602 edition of the 'Tiomna Nuadh' were those presented by Queen Elizabeth to O'Kearney for his catechism in 1571. A new type was used for this edition (small pica cut by Moxon in London at Boyle's expense) as the earlier Irish type used in 1602 had completely disappeared.
Our copy contains an English preface by Andrew Sall (formerly an Irish Jesuit who joined the Church of England in 1674), together with an Irish translation by an ex-priest, Mr. Reilly; according to Darlow & Moule, the addition of these prefaces was an afterthought and early copies of the edition (""e.g. most of those presented to prominent persons and institutions by the Hon. R. Boyle"") did not contain these prefaces. Wing locates variant imprints of this edition, one with the name of Robert Everingham only in the imprint as here, and another with the name of Benjamin Tooke. 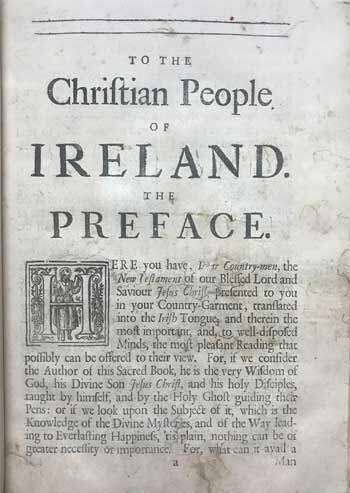 The Everinghams father and daughter were well accomplished in printing in Irish, Robert printed the first edition of The Old Testament 'Leabhuir na tSean Tiomna' in Irish in 1685 (that year also saw the publication of 'Shakespeare's First Folio'). This was followed by the second edition of the Tiomna Nuadh in 1681, and in 1690 an edition for the Gaelic-speaking Highlanders. Eleanor also published 'Seanmora ar na Priom Phoncibh na Creideamh', translated into Irish by Philip MacBrady and John O'Mulchonri in 1711." 1681 ODOMHNUILL, hUilliam.