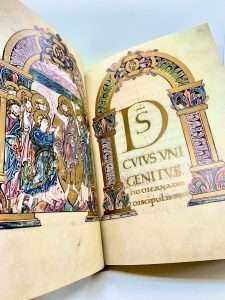 Æthelwold of Winchester (also spelled Aethelwald, Ethelwold, etc.), (c.904-984) was Bishop of Winchester from 963 to 984 and one of the leaders of the tenth-century monastic reform movement in Anglo-Saxon England.

Monastic life had declined to a low ebb in England in the ninth century, partly due to the ravages caused by Viking attacks, and partly because of a preference for secular clergy, who were cheaper and were thought to better serve the spiritual needs of the laity. Kings from Alfred the Great onwards took an interest in the Benedictine rule, but it was only in the middle of the tenth century that kings became ready to commit substantial funds to its support. Æthelwold became the leading propagandist for the monastic reform movement, although he made enemies by his ruthless methods, and he was more extreme in his opposition to secular clergy than his fellow reformers, Saint Dunstan and Oswald of Worcester. He is nevertheless recognised as a key figure in the reform movement, who also made a major contribution to the revival of learning and the arts. He was an important political figure, backing Ethelred the Unready against Edward the Martyr, and playing a major advisory role during Ethelred's minority.

Æthelwold was certainly bishop during the period when the Winchester school of manuscript illumination reached its peak, and the most important surviving manuscript of the school, the Benedictional of Saint Æthelwold (British Library), was commissioned by him. He also rebuilt the Old Minster at Winchester, completed in 980.