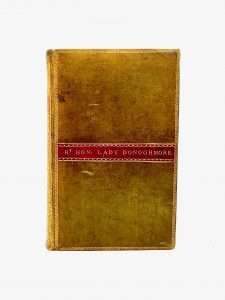 Sermons on Different Subjects ... by the Gospel in all Good Christians. With list of subscribers. Dublin: Marchbank, 1785. pp. xvi, 390 + errata. Bound by William McKenzie of Dublin in contemporary olive-green goatskin. The covers are framed with an elegant gilt Greek-key roll. Flat spine with a red goatskin letterpiece and elaborate tooling including tools R4, R7 and R16 in McDonnell and Healy's Gold-Tooled Bookbindings Commissioned by Trinity College Dublin; edges of the boards hatched in gilt, leaves stained yellow. Gilding in very fresh condition.

Christiana Hely-Hutchinson, 1st Baroness Donoughmore (née Nickson) (d. 24 June 1788) was a suo jure hereditary peer; as a lady, however, she was unable to sit in the Irish House of Lords. Christina Nickson was the daughter of Abraham Nickson of Munny, County Wicklow, and grand-niece and heir of Richard Hutchinson of Knocklofty. Prior to her husband's death she was created, in her own right, a hereditary peer as Baroness Donoughmore, of Knocklofty, County Tipperary, on 16 October 1783. She married Rt. Hon. John Hely-Hutchinson (1724-1794) MP, son of Francis Hely of Gertrough, by his spouse Prudence née Earbury, on 8 June 1751. They had four children.

Provenance: From the library of the late Patrick King.