ANDERSON, James. A Genealogical History of the House of Yvery. 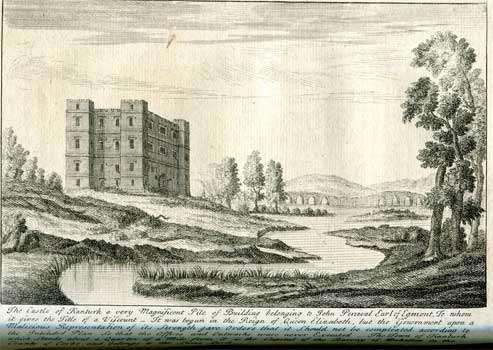 THE PERCEVALS OF CORK

[ANDERSON, James] A Genealogical History of the House of Yvery; in its Different Branches of Yvery, Luvel, Perceval, and Gournay. With plates, numerous genealogical tables and coats-of-arms throughout the text. London: Printed by H. Woodfall, jun. 1742. pp. (1) [2], xxix, [1], 445, 3 (plates), (2) 448-533, [1], [19] mezzotint portraits, [10] engraved plates (complete). Title printed in red and black. Later half calf over marbled boards. Spine divided into six panels by five gilt raised bands, title in gilt on red morocco label in the second, volume number in gilt direct in the third. A very good set. Very rare.