ANNALS OF INISHFALLEN. The Annals of Inisfallen Reproduced in Facsimile from the Original Manuscript 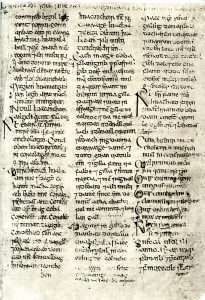 ANNALS OF INISHFALLEN. The Annals of Inisfallen Reproduced in Facsimile from the Original Manuscript (Rawlinson B 503) in The Bodleian Library. With a descriptive introduction by R.I. Best and Eóin MacNeill. Dublin: R.I.A., 1933. Small folio. pp. viii, 29, [1], 58 (leaves of plates). Quarter linen on blue paper boards. A very good copy. Very scarce. This is the principal collection of Munster annals and ‘the earliest extant corpus of Irish annals.’ The portion from very early times down to 1092 is the work of one scribe; the remainder down to 1326, with a lacuna at 1130-59, was penned by some 38 scribes, thus making the manuscript ‘a kind of album of Irish palaeography’. The work is associated with numerous monastic sites throughout Munster - Emly, Toomgraney, Killaloe, Lismore and, finally, Inisfallen. [Nollaig Ó Muraíle]
There is not much known of their history until they came into the possession of Sir James Ware (1594- 1666). These ‘Annals’, like those ascribed to Tighernach are preceded by the brief chronicle of universal history in which the early Irish kings make their appearance, and the birth, captivity and escape of St. Patrick are recorded. This is followed by the history of Ireland from A.D. 428 and continues down to the year 1326. An English translation of portion of the ‘Annals’ was made for the use of Ware, by that well-known Connaught antiquary Dubhaltach Mac Fhirbhisigh, a copy of which is preserved in Trinity College.

INCLUDES EMMET’S SPEECH FROM THE DOCK