ATKINSON, Robert. The Passions and the Homilies from the Leabhar Breac: Text, Translation, and Glossary. 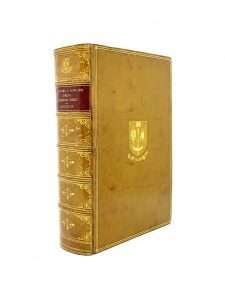 ATKINSON, Robert. The Passions and the Homilies from the Leabhar Breac: Text, Translation, and Glossary. 141 Dublin: Hodges Figgis, 1887. pp. vi, [5], 36-957, [1]. Contemporary full polished calf with original printed wrappers bound in. Covers framed by double gilt fillets, enclosing in gilt on the upper cover the badge of Glasgow University. Spine divided into six panels, title in gilt on red morocco label in the second, the remainder tooled in gilt to a centre-and-corner design. Glasgow University Prize label on front pastedown; splash marbled endpapers; red and gold endbands. All edges sprinkled. A very attractive copy.  "Like most copies our copy does not contain the ""Introductory lecture on Irish lexicography"", announced for pp 3-34, and which was published separately.

An exceptionally gifted linguist and teacher, Atkinson studied most of the European, Near Eastern, and Indian languages, including Persian; also Chinese and Coptic, and planned a dictionary of Vedic. Most of his published work, however, deals with the Irish language, beginning in 1876, when at the Academy's request he produced a valuable edition of the manuscript Book of Leinster. In 1880 Atkinson became first editor of the RIA's planned ‘Dictionary of the Irish language’; despite lack of funding, some progress was made. The texts he subsequently worked on were selected chiefly to serve the dictionary's needs: introductions to facsimile editions of the Book of Ballymote and the Yellow Book of Lecan appeared in 1887 and 1896; he published the Passions and homilies from the Leabhar Breac (1887) and Trí Bior-gaoithe an Bháis (1890), and edited, with J. H. Bernard, The Irish Liber Hymnorum (2 vols, 1898). He spent twelve years on the complexities of The ancient laws of Ireland, producing a fifth volume of the series and a glossary, but these, partly based on the work of others, have been severely criticised. Atkinson died 10 January 1908, at his home in Rathmines, and was buried in Skipton, Yorkshire." ATKINSON, Robert.