BAYLY, Thomas. Certamen Religiosum: or, A Conference between the late King of England 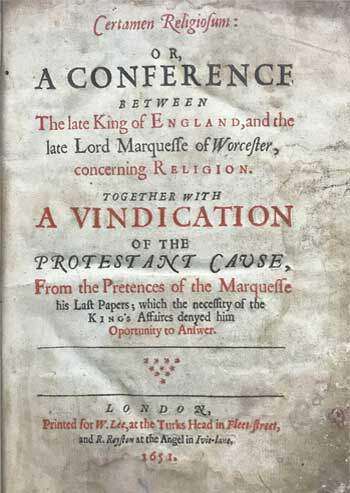 BAYLY, Thomas. Certamen Religiosum: or, A Conference between the late King of England, and the late Lord Marquesse of Worcester, concerning Religion. Together with a Vindication of the Protestant Cause, from the Pretences of the Marquesse his Last Papers; which the necessity of the King's Affairs denyed him Oportunity to Answer.  London: Printed for W. Lee, at the Turks Head in Fleet-street, and R. Royston at the Angel in Ivie-lane, 1651. Quarto. pp. [xii], 366, 84, [1]. Contemporary full calf, spine professionally rebacked. Professional paper repair to some pages including title and portrait. Old water stain and minute traces of old worming. Inscribed in Latin on front blank by Walter Kennedy. Rare survival from an old Gaelic family of the Pale. A good copy.  "This book, which centred on religious controversies, was allegdly written by Thomas Bayly, a Church of England clergyman who became a convert to the catholic faith. Thus, Walter Kennedy, a catholic alderman, and owner of this book, would have been interested in the religious arguments proposed in this volume.

RARE SURVIVAL FROM AN OLD GAELIC FAMILY OF THE PALE

The ownership of books from the sixteenth and seventeenth centuries by Gaelic or Old English Irishmen are of great rarity. None of their libraries have survived and even catalogues of the collections of some, such as the Earls of Desmond, the Barons Delvin, and members of the Kennedy family, have not come down to us. The rarity of surviving volumes is not in doubt and may only be so because we have not yet looked hard enough for inscriptions in books of that period in libraries in Ireland or abroad.

On the east side of Nicholas Street, stands 'Kennedy's Lane', so called from having being built about the reign of James I, by the family of Kennedy, who, from the twelfth to the sixteenth centuries, were chiefs of Ormond, whence a branch of the clan removed to Dublin, where some of them became eminent merchants, and others distinguished themselves at the Bar. In 1591, 1601, 1631, and 1683, members of this family were Sheriffs of the city. Alderman Walter Kennedy resided in High Street, where he traded as a merchant, in partnership with Alderman Robert Kennedy and Neal Naghten, and died in 1672, having accumulated a very large property, and purchased, among other lands, an estate at Clondalkin.

'Certamen Religiosum' was published in 1649 by Thomas Bayly, and is here reprinted with Cartwright's reply in which he doubts the authenticity of the conference because it is too favourable to the Catholic Church. Cf. DNB.
""Of the Church of England, the second part of the rejoynder to the Marquess of Worcesters reply to His Late Majestie's answer to the said Marquesse's plea for the Romish religion"" has separate pagination but continuous register.

The inscription in Latin by Walter Kennedy translates thus: 'In my cup Thetis and Laios are joined / the goddess conjoined to the god, but the goddess is the greater [literally, greater than him]. / 15 September 1660. / By me, Walter Kennedy.' Thetis was a Greek goddess and Laios (or Laeus, in Latin) a Greek god, sometime identified with Bacchus, the god of drink.