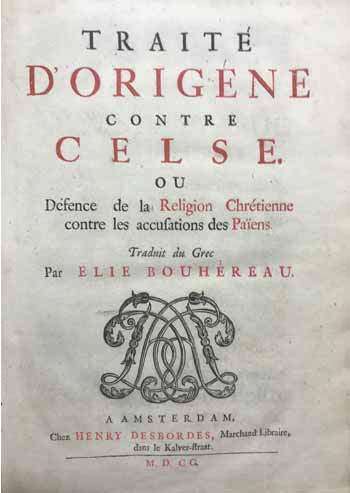 BY THE FIRST PUBLIC LIBRARIAN IN IRELAND

First edition in French, and the only substantial published work by Élie Bouhéreau, the first librarian of Marsh's Library in Dublin. Bouhéreau (1642?-1719) was a learned Huguenot physician who fled to England in 1685 on the revocation of the Edict of Nantes. He was, according to the burial register of the Conformist Huguenot churches in Dublin, a ""distinguished medical doctor and zealous Protestant of La Rochelle, very knowledgeable and very highly regarded."" With the accession of William III he was appointed secretary first to Thomas Cox, envoy to the Swiss Cantons, and personal secretary to the Marquis de Ruvigny, commander-in-chief of English forces in Piedmont. He served in Ireland with Ruvigny, Earl of Galway, when the latter was Lord Justice of Ireland, 1697-1701. While he was in Dublin, the learned refugee came to the notice of Narcissus Marsh, the protestant primate, who was then campaigning for the establishment of a public library in Dublin: Marsh persuaded Bouhéreau to give his own library (valued at £500-600) on condition that he be appointed stipendiary library keeper. The library was established by Royal Warrant in 1701 and by Act of Parliament in 1707; Bouhéreau occupied the post until his death in May 1719, latterly with the assistance of his son John. From the time of his first journey in 1689 to his death he kept a diary, which is kept in the Library. 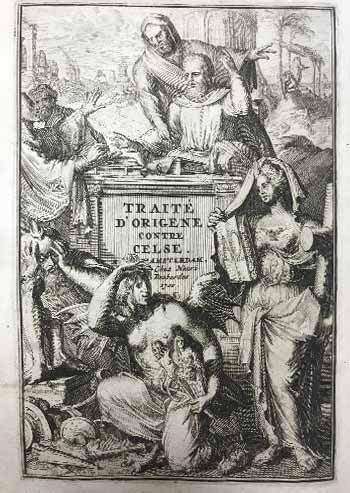 The translation of Origen's 'Contra Celsum' (a reply to the pagan Celsus's attack on Christianity) was begun as early as 1669, when Bouhéreau's friend Valentin Conrart, one of the founders of the Académie Française, persuaded him to direct his studies in a definite course. It was still not finished in 1685, when the translator submitted the MS to Friedrich Spanheim, and the final publication was delayed until early 1700, when Bouhéreau was established at Dublin: the dedication to Galway in the present copy has 'A Dublin, le [blank]', but the copy at Marsh's library is apparently dated 1 January (see White p. 139).

Bouhéreau was a notable Huguenot scholar, but this is his only substantial work: his only other published work is an early pamphlet, 'Lettre a Mademoiselle D.B., sur le choix d'un medecin' (1674); and he also contributed to an edition of the Bible in 1714.

Brunet IV 229 notes that 'dans beaucoup d'exempres on a omis la préface, les errata, et l'index des notes'; this copy has the preface, but the two leaves at the end are not present and clearly were not issued with it. They are present (oddly enough, in duplicate) in the copy Bouhéreau gave to Spanheim, now in the British Library; but the NUC record does not list them and Brunet seems to be accurate (as usual) in his estimate - a quick check of several known copies reveals almost none with these two final leaves." BOUHÉREAU, Élie.