BOYLE, Roger Earl of Orrery. A Treatise of the Art of War. 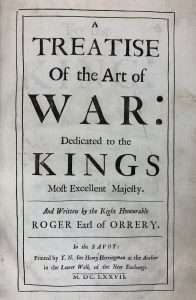 BOYLE, Roger Earl of Orrery. A Treatise of the Art of War: Dedicated to the Kings Most Excellent Majesty. With engraved plates. London: in the Savoy, by T.N. for Henry Herringham, 1677. Folio. pp. [xiv], 206. Contemporary full panelled calf, spine expertly rebacked, title in gilt on red morocco letter-piece. An unusually large paper copy with generous margins. In fine condition. Rare.

Roger Boyle, Lord Broghill, Earl of Orrery (1621-1679), son of Richard Boyle, Earl of Cork, elder brother of Robert the scientist, was born at Lismore, County Waterford. He was deputy in Inchiquin's Munster Command during the Confederate War and was bitterly opposed to the cessation of arms. After the execution of Charles I, Boyle retired to his Somerset estate, and was about to leave for the Continent to plot for the restoration of the Stuarts, when he was summoned by Cromwell who offered him the choice of imprisonment in the Tower or service under the Commonwealth. He accepted the latter and set off for Ireland, and late in 1649, he met Cromwell near Waterford, with 1,500 men whom he had raised. He assisted at the Sieges of Clonmel and Limerick, destroyed Lord Muskerry's royalist-confederate force at Macroom and executed the Catholic bishop, Boethius MacEgan. Afterwards in England he continued to be one of Cromwell's most trusted friends and advisers.

Not satisfied however with Cromwell's successor, Boyle returned to Ireland and with Coote seized Youghal, Clonmel, Carlow, Limerick, Drogheda, Galway and Athlone for the King, and helped to end the rule of the Cromwellians there. After the Restoration he was made Earl of Orrery, Lord Justice, and President of Munster, and, in the latter capacity, he successfully defeated the attempt by the Duke of Beaufort, Admiral of France, to land at Kinsale. In 1661 he built a mansion at Charleville, which he named in honour of Charles II and: "spent the remainder of his life principally in contemplation, reading the Scriptures, and other serious studies, partly at Castlemartyr and partly at Charleville". He died in October, 1679 and was buried in the church of Youghal where there is a monument to him.

This is an important work which was described by Boyle's contemporary Anthony Wood "Commended by many expert Captains for the best piece extant in English". The DNB hails it as "of undoubted interest as indicating the condition of the art at the close of the Cromwellian wars .. written in a terse and effective style". As a frontispiece, we have what is generally accepted is the finest equestrian portrait of Charles II, by de Blois, and there are six other fine double-page plates.