CARTE, Thomas. An History of the Life of James Duke of Ormonde

CARTE, Thomas. An History of the Life of James Duke of Ormonde. From his birth in 1610, to his death in 1688. Wherein is contained an account of the most remarkable Affairs of his time, and particularly of Ireland, under his Government. To which is added ... a very valuable Collection of Letters, written by his Grace, or by the King, the Secretaries of State ...and serving to verify the most material facts in the said history. Three volumes. London: Printed by F. Bettenham, for J.J. and P. Knapton, in Ludgate-Street ... and T. Wotton, in Fleetstreet, 1735/36. Foolscap folio. pp. (1) lxvii, [1], 606, 6, (2) ii, 559,133, 11, (3) xii, 608. Tail-pieces, capitals; marginal notes. Folio. Contemporary full calf, boards framed by double gilt fillets; spines and corners professionally rebacked. Title in gilt on red morocco label on spine, volume numbers in gilt direct. From the library of Lord Farnham with his armorial bookplate on front pastedown. Some surface wear to boards. Very good.
Life of one of the most distinguished Irish statesmen and soldiers of his day, a supporter of English rule who was nevertheless a conciliator. This work is further enhanced with the addition of the third volume (usually wanting), which contains a valuable archive of important correspondence. James Butler, 12th Earl and 1st Duke of Ormond, known as the `Great Earl’ was born at Clerkenwell, London, in 1610, in the house of his grandfather, Sir John Poyntz. Shortly after his birth, his parents returned to Ireland; he was brought by his nurse when three years of age, and for the rest of his liferemembered being carried through Bristol on that occasion to take the ship for Ireland. He succeeded to the earldom in 1633. A royalist, he raised a troop of horse for the king.
James was six times Lord Lieutenant of Ireland. He was one of the most distinguished Irish statesmen and soldiers of his day, a supporter of English rule who was nevertheless a conciliator. He arranged a cease fire with the Irish rebels in 1643, and offered a treaty in 1646 which granted religious tolerance to Catholics. In all those troublesome times he fought for the king in the senate and the field until 1650, when he retired to France. He played an important role in the restoration of Charles II and was afterwards created Marquis and Duke by him. He retired to Dorset and died there in 1688. Baron Farnham, of Farnham in the County of Cavan, a title created in the Peerage of Ireland in 1756 for John Maxwell, who had previously represented Cavan Borough in the Irish House of Commons. John Maxwell’s son, the second Baron, was created Viscount Farnham in 1760 and Earl of Farnham in 1763. Both titles became extinct when he died childless in 1779. His brother and successor, the third Baron, was again created Viscount Farnham in 1781 and Earl of Farnham in 1785. These titles were also in the Peerage of Ireland. His son, the second Earl, sat in the House of Lords as an Irish Representative Peer from 1816 to 1823. However, he had no children and on his death in 1823 the viscountcy and earldom became extinct. 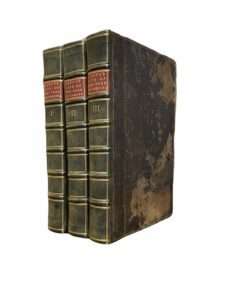