CHAMBERS, Ephraim. Cyclopaedia: or, an Universal Dictionary of Arts and Sciences 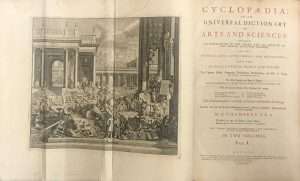 COPAC locates 3 copies only. ESTC T135914 locates 2 in Ireland, 3 in England, and 3 North America. Ephraim Chambers (c.1680-1740) was an English writer and encyclopaedist, who is primarily known for producing the Cyclopaedia, or a Universal Dictionary of Arts and Sciences.
Chambers was born in Kendal, Westmorland, England, and attended Heversham Grammar School there. Little is known of his early life, other than that he was apprenticed to a globe maker, John Senex, in London from 1714 to 1721. It was here that he developed the plan of the Cyclopaedia. After beginning the Cyclopaedia, he left Senex’s service and devoted himself entirely to the encyclopaedia project. He also took lodging in Gray’s Inn, where he remained for the rest of his life. Chambers died in Islington and was buried in the cloisters of Westminster Abbey. The first edition of the Cyclopaedia appeared by subscription in 1728, in two folio volumes and was dedicated to the king. In addition, Chambers wrote for, and possibly edited, the ‘Literary Magazine’ (1735-1736), which mainly published book reviews.
“Although the Cyclopaedia is now but a landmark in the history of encyclopaedia publishing, its impact and influence upon later generations was incalculable. It directly influenced the famous Encyclopédie of Diderot, and the new Encyclopaedia compiled by Abraham Rees and published between 1802 and 1820. Less directly, the pioneering example of Cyclopaedia stimulated the publication of the Encyclopaedia Britannica and many subsequent works” (Walsh: Anglo-American General Encyclopaedias). 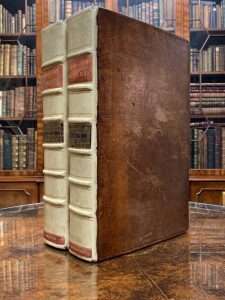 Provenance: From the library of Mount Congreve with the signature of A.U. [Ambrose Ussher] Congreve (d.1809) on titlepage.
Mount Congreve was the seat of 6 successive generations of the Congreve family until the death of Ambrose Congreve at the age of 104 in 2011. The house is situated close to the southern bank of the river Suir approximately 7 kilometres from Waterford city. It overlooks County Kilkenny to the north. The architect was John Roberts, a Waterford-based architect who subsequently designed and built most of the 18th-century public buildings in Waterford, including both cathedrals. Ambrose Christian Congreve died in 2011 and left the estate in trust to the Irish State. The contents of the house including the Mount Congreve Library collection were sold by public auction in May (London by Christie’s) and July (Waterford by Mealy’s) 2012. John Congreve married Mary Ussher in 1758 and had Mount Congreve built in 1760. He assembled the Mount Congreve Library, an interesting collection of rare and valuable books. The library was catalogued by John Congreve and a printed catalogue of the library was published in 1827.