E.F. [CARY, Henry, Viscount Falkland, or FANNANT, Edward, attrib.] The History of the Life, Reign, and Death of Edward II. King of England, and Lord of Ireland 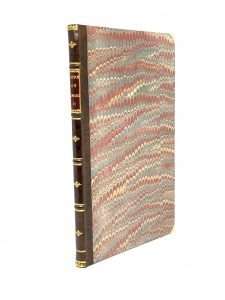 E.F. [CARY, Henry, Viscount Falkland, or FANNANT, Edward, attrib.] The History of the Life, Reign, and Death of Edward II. King of England, and Lord of Ireland. With the rise and fall of his great favourites, Gaveston and the Spencers. Written by E.F. in the year 1627. and printed verbatim from the original. London: Printed by J.C. for Charles Harper, at the Flower-de- luce in Fleet-street; Samuel Crouch, at the Princes Arms in Popes-head-Alley in Cornhil; and Thomas Fox, at the Angel in Westminster-hall, 1680. First edition. Tall slim quarto. pp. [4], 132, 137-160, [4], with normal mispaginations, collated complete. Titlepage in red and black. Modern quarter calf on marbled boards, title in gilt on red morocco label on spine; vellum tips. Some toning. Previous owner’s initials, dated 1711 on titlepage with bookplate on verso. Lacks engraved frontispiece. A very good copy. ESTC R23073.
Found among Henry Cary, Viscount Falkland’s papers after his death. Variously attributed to him and Edward Fannant. Advertisement: p. [4] at end. Includes index.