FITZGERALD, Rev. P. & M’GREGOR, J.J. The History, Topography, and Antiquities, of the County and City of Limerick 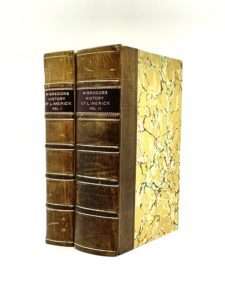 The following notice of this Limerick author, Rev. P. Fitzgerald, appeared in MS. in a copy of the History of Limerick which he wrote in conjunction with J. J. McGregor, its writer being as there stated, Caleb Powell of Clanshavoy, Limerick: ""Patrick Fitzgerald, the ostensible compiler of this history, which was really arranged by McGregor, a Waterford bookseller of some literary merit, was the son of a tailor in Bruff, County Limerick, and was first employed at the school of Mr. Buckley in that town. Evincing an aptitude for learning, he was gratuitously instructed in that seminary. He subsequently accompanied young gentlemen of the name of Bennett of that neighbourhood to Dublin to read with them their college course. These young men had been educated at Mr. Buckley's, and their mother, considering Patrick Fitzgerald a sober, steady youth, furnished funds for his maintenance, and he read and obtained a Sizarship in Trinity College, Dublin, having abandoned the Roman Catholic religion, in which he had been brought up. He afterwards became private tutor to Mr. Crips and others, got ordained, and married a Miss Stewart of the County Galway, who had respectable connections. The Rev. P. Fitzgerald had an extraordinary aptitude for genealogical traditions, and had accounts more or less accurate of many Limerick families"".
The titlepage of the above-named History of Limerick shows that he was at that time Vicar of Cahircorney in the Diocese of Emly.
There is a multi-folding map of County Limerick, Multi-folding plan of the City, engraved views of Askeaton, Harbour of Limerick, Dominican Chapel, Lunatic Asylum, Saint Mary's Cathedral, County Court House, County Goal, Wellesley Bridge and Mr. Roche's Garde."