GALLAGHER, Frank. Days of Fear. A Diary of Hunger Strike 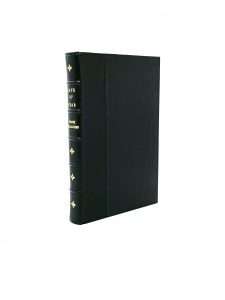 Frank Gallagher 1893-1962 [pseud. David Hogan] was a native of Cork. London correspondent of William O’Brien’s ‘Cork Free Press’, and subsequently its final editor. Although he was himself a separatist, he personally admired O’Brien. The paper was suppressed after Gallagher accused the British authorities of lying about the conditions and situation of republican prisoners in the Frongoch internment camp.

Gallagher joined the Irish Volunteers; worked with Erskine Childers on Republican publicity staff, and edited the ‘Irish Bulletin’, from 1919. Imprisoned in 1920, he later joined the hunger strike from 5th to 15th April 1920. This diary was written during his actual hunger strike “‘Days of Fear’ are living, livid days. As full of gentleness as of fear, as full of despair as of faith. And because they are real they are days strange and most poignant”.