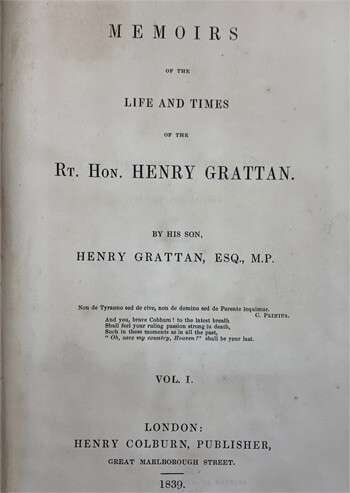 GRATTAN, Henry. Memoirs of the Life and Times of the Rt. Hon. Henry Grattan, by his son, Henry Grattan, Esq. M.P. Five volumes. London: Colburn, 1839/1846. Contemporary half vellum on marbled boards, titles in gilt on red morocco labels on spines. From the library of John Perceval, Earl of Egmont, Baron Perceval of Burton and Viscount Perceval of Kanturk in the County of Cork with his armorial bookplate on front pastedown. Also with bookplate of David Whelan. A fine set.

"Henry Grattan (1746-1820), patriot and orator, born Fishamble Street, Dublin, 3 July 1746, educated TCD and Middle Temple, London. Called to the Bar 1772, MP for the borough of Charlemont in Irish Parliament 1775, Henry Flood lost his popularity by accepting the office of Vice-Treasurer, and Grattan soon took his place as leader of the opposition. His first success was the repeal of the restrictions on trade, and he then campaigned for legislative independence for Ireland. This demand was advanced with vigour at the Dungannon Convention in 1782, and the repeal of the Declaratory Act and other important legislation soon followed. The Irish Parliament voted £50,000 to Grattan to show their gratitude, but before long Flood, who was no longer in the government service, led a movement that agitated for 'simple repeal' rather than the concessions on which Grattan hoped to build, and their differences erupted in a dramatic and bitter quarrel in the Parliament. 'Grattan's Parliament could not become the organ of the statesmanship of which Grattan himself dreamed. The great majority of the population had no representation, two-thirds of the seats were held at the nomination of patrons, and corruption was rife. Demands for parliamentary reform put forward in 1783 at a Dublin Convention were rejected. Grattan, a Protestant, had now become a strong advocate of Catholic emancipation, but there seemed little hope of progress by parliamentary reform, and the influence of the French Revolution had generated support for the United Irishmen. His health weakened, Grattan retired from parliament to his house at Tinnehinch, County Wicklow, in 1797.

After the rising of 1798 he returned to the Parliament as a member for Wicklow to fight against the Act of Union, but his eloquence and courage were of no avail. In 1804 he commenced a second parliamentary career, entering the Westminster Parliament to support the renewed Catholic agitation. He remained until his death a leading Parliamentary advocate of emancipation, as well as a prominent Whig spokesman on other issues. He devoted the rest of his life to the cause of Catholic emancipation, which he maintained was both the price of the Union and intrinsically just. In 1819 his health finally began to give way, but his responsibility for this cause weighed more heavily on him. In May 1820 he left Dublin for London; he was so ill that he traveled by canal from Liverpool, as he was unable to bear the jolting of a carriage. He died in London in 1820 and is buried in Westminster Abbey close to his old opponent, Castlereagh. His son Henry published a collection of his speeches in 1820 and this biography in 1839-46. The great Henry Grattan was a scholar, a lover of poetry, and an and orator of wonderful power, who even won the support of his enemies."