HERBERT, Máire. Iona, Kells and Derry: The History and Hagiography of the Monastic Familia of Columba 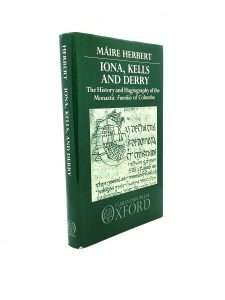 HERBERT, Máire. Iona, Kells and Derry: The History and Hagiography of the Monastic Familia of Columba. Oxford: Clarendon Press, 1988. Demy octavo. First edition. pp. xiii, [1], 327. Blue buckram, titled in gilt. A fine copy in pictorial dust jacket. This is a study of the history and documentary records of one of Ireland’s most important early monastic communities, the familia of St Columba (Colum Cille) between the sixth and twelfth centuries. The federation of Columban monasteries left three major hagiographical works - the Vita Columbae of Adomnan, the Life of Adomnan, and an Irish Life of Colum Cille. The conventional literary settings in which the Columban texts are presented has tended to obscure the valuable information they contain about the circumstances and prevailing attitudes of the time. Approaching the texts from three points of view, historical, linguistic, and literary, Dr Herbert makes clear how the hagiography reflected, and responded to, significant events.