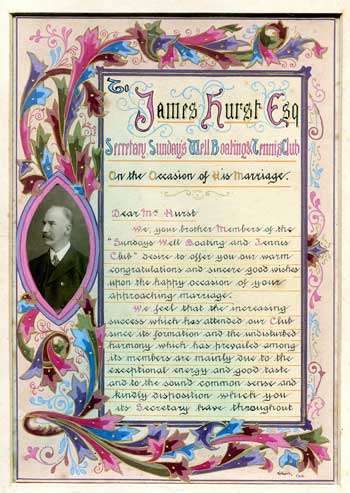 [ILLUMINATED ADDRESS] Illuminated Address to James Hurst, Esq., Secretary Sunday's Well Boating & Tennis Club, on the occasion of his marriage. There are two hand-painted illuminated leaves and four leaves with names inscribed, within a sunken panel on thick card. The calligraphy is of the highest quality by Gilbert of Cork. With a frontispiece photograph (hand-painted) of the tennis club with umpires and numerous club members in the foreground. The first leaf contains an oval portrait of James Hurst within the illuminated floral border. Cork: n.d. (c.1904). Quarto. Bound possibly by Guy of Cork in full sumptuous red morocco over bevelled boards. Cover decorated with a wide floral border elaborately tooled in gilt enclosing the title in gilt in the centre. Spine divided into five compartments by four raised bands, with a floral tool in gilt in the centre of each, turn-ins gilt; red, white, black and gold splash-marbled endpapers; red and gold endbands. All edges gilt. Occasional light foxing. A unique item relating to one of the country's foremost clubs.

Sunday's Well Boating & Tennis Club was founded in 1899, shortly after a successful "Sunday's Well Regatta and Water Carnival" had been held on the Lee. It was formed by some of the regatta committee organisers, who were boating and tennis enthusiasts from the locality. The aforementioned committee then leased a plot of ground off the Mardyke Walk alongside the river and that is the ground which the Club occupies today.

The clubhouse was built by the Exhibition Committee of the Cork International Exhibition (1902/03) for visiting dignitaries, which included King Edward VII and Queen Alexandra. In 1904, the Club took possession of the clubhouse. 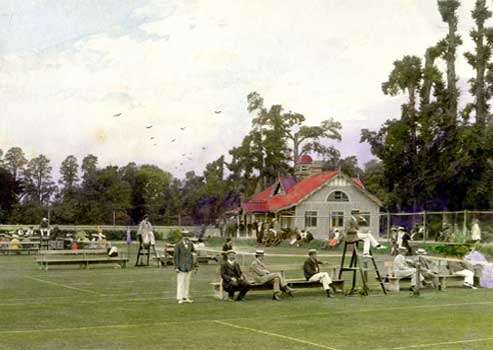 After the Cork Exhibition, Sunday's Well had, in addition to its magnificent new clubhouse, five excellently laid out and perfectly manicured grass courts. Set in peaceful and beautiful surroundings, they became the pride of the country.

A most beautiful and exquisitely illuminated address to James Hurst, who was a well-known Cork businessman, listed in the 'Cork Directory' for 1907 as having premises in Patrick Street.