Sir Ernest Henry Shackleton (1874-1922), explorer, was born in Kilkea, County Kildare. After private education in Ireland he went to Sydenham, and thence to Dulwich College. He went to sea as an apprentice in the merchant marine in 1890. A desire for adventure, not unmixed with the hope of fame, led Shackleton to successfully apply for a post on the National Antarctic Expedition under Scott in the 'Discovery'. He led his own expedition in the whaler 'Nimrod' in 1907 and came within 97 miles of the South Pole. In 1914 he set out again on the 'Endurance' but she was beset in pack ice for nine months. Shackleton's epic journey across treacherous seas to summon help, was truly one of the greatest feats of human endurance of the twentieth century. Tom Crean, later of The South Pole Inn, Annascaul, accompanied his fellow countryman on this expedition. Their ship was 200 miles from the nearest land, and 1000 miles from human assistance. Shackleton made a further Antarctic journey in 1921, but died suddenly in South Georgia the following year. 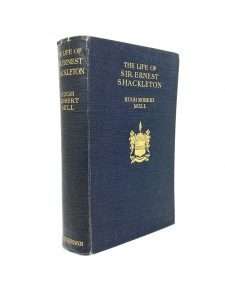