WALLER, John Francis. Inauguration Ode: Performed at the Opening of The National Exhibition of the Arts, Manufacturers, and Materials of Ireland, Cork, 10th June, 1852.

Author Title Catalog Mainhead Pub Place Price Location Summary PubDate Sort
WALLER, John Francis. Inauguration Ode: Performed at the Opening of The National Exhibition of the Arts, Manufacturers, and Materials of Ireland, Cork, 10th June, 1852. Written by John Francis Waller, M.R.I.A. Composed by Robert P. Stewart. 138 RARE CORK ITEM Cork: J.J. Bradford & Dublin: James M'Glashan, 1852. Quarto. pp. [vi], 31. Title within double red ruled border and music within a decorated border by W.M. Morison, Lithographer. Quarter linen on illustrated boards. Signed presentation copy from the composer Robert P. Stewart to his friend T.C. Fitzgerald dated July 9th, 1856. Mild water stain, minor wear to corners. A very good copy of an exceedingly rare item.  "COPAC locates the BL and NLW copies only.
John Francis Waller (1810-1894) poet and editor was born in Limerick, educated at Trinity College, Dublin and was called to the Irish Bar in 1833. He held the position of vice-president of the Royal Irish Academy and was appointed Registrar of the Rolls Court in 1867.
Waller became a contributor to and ultimately editor of the 'Dublin University Magazine', usually writing under the pseudonym of ""Jonathan Freke Slingsby."" He also edited the 'Imperial Dictionary of Universal Biography'. He published several volumes of poems and also wrote popular songs, including Cushla Ma Chree, The Spinning Wheel and Song of the Glass. Many of his odes and poems were set to music by Irish composers, Robert Prescott Stewart being particularly fond of his works. He was responsible for the explanatory notes and a life of the author in a new edition of ""Gulliver's Travels"" written by Dean Jonathan Swift." WALLER, John Francis. 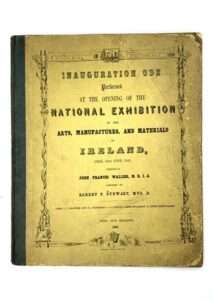