O’CONNOR, Roger. Chronicles of Eri; being the history of the Gael Scot Iber: or, The Irish People 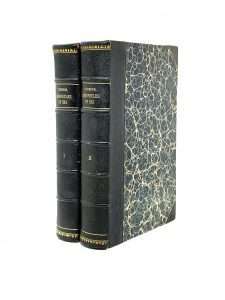 O’CONNOR, Roger. Chronicles of Eri; being the history of the Gael Scot Iber: or, The Irish People. Translated from the original manuscripts in the Phoenician dialect of Scythian language. Two volumes. London: Phillips, 1822. pp. (1) xiv, [2], ccclxii, [ii], 91 (2) [ii], 509, 3. Later half blue morocco over marbled boards, title in gilt on morocco labels on spines. Scattered light foxing as usual. Previous owner's bookplate on verso of frontispiece. A very good set. Very scarce.
In 1822 O’Connor published The Chronicles of Eri, the book is mainly, if not entirely, the fruit of O’Connor’s imagination. Roger’s portrait is prefixed, described as ‘O’Connor Cierrige, head of his race, and O’Connor, chief of the prostrated people of this Nation. Soumis, pas vaincus.’ O’Connor is described as a man of fascinating manners and conversation, but Dr. Madden considers that his wits were always more or less disordered. Through life he professed to be a sceptic in religion, and declared that Voltaire was his God. He died at Kilcrea, County Cork, on 27 Jan. 1834. With engraved titlepage, portrait frontispiece, five folding maps and two folding plates (one hand coloured).