TEMPLE, Sir John, Kt. The Irish Rebellion: or, An History of the Beginnings and first Progress of the General Rebellion raised within the Kingdom of Ireland, upon the three and twentieth day of October, 1641

TEMPLE, Sir John, Kt. The Irish Rebellion: or, An History of the Beginnings and first Progress of the General Rebellion raised within the Kingdom of Ireland, upon the three and twentieth day of October, 1641. Together with the Barbarous Cruelties and Bloody Massacres which ensued thereupon. Bound with: A Call to the Hugonites: or, a Memento to all that can see as far as to Calais A-Dover, etc. [Drop-head title. Imprint from colophon. Re-printed by F. Dickson at the Union on Cork-Hill, 1712]. Together with: The State of the Protestants of Ireland. Dublin: Printed for Patrick Campbell, and are to be Sold at his Shop on the Lower-end of Cork-Hill, 1713. Sm. 4to. pp. [x], 176, 4, [xx], 344. The 'State of the Protestants of Ireland' has separate pagination and register. The imprimatur is dated 1691. With the armorial bookplate of Eaton William Waters. Repair to titlepage. Occasional foxing, some cont. marginalia. Cont. full panelled calf. Spine expertly rebacked. A good copy of an extremely scarce item. "ESTC T121404. Sweeney 5026 lists the first edition. Copac locates only 4 copies of 'A Call to the Hugonites'. 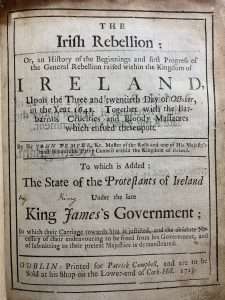 John Temple (1600-77), was educated at Trinity College, Dublin, of which his father was a fellow and later Provost. He was knighted in 1628, and in 1640 was appointed Master of the Rolls in Ireland. Upon the outbreak of the rebellion of 1641, he was most active in issuing proclamations and putting Dublin in a proper state of defence. Two years later he was imprisoned for a few months, along with Sir William Parsons, Sir Adam Loftus, and Sir R. Meredyth, for opposing the cessation of arms which the Earl of Ormond was commanded by the King to agree to. Regarded as sufferer for the cause of the Commonwealth, he was provided with a seat in the English Parliament.

This, the first edition of this work caused a great sensation, supposedly written by an eye-witness to the events, and did much to inflame hatred and bigotry in England against the Irish, and thereby justifying Cromwell's later harsh treatment of them. Temple's own words were that: ""Since the rebellion first broke out, unto September 15, 1643, which was not full two years after, above 300,000 British and Protestants were cruelly murdered in cold blood, destroyed some other way, or expelled out of their habitations"". That figure was greatly exaggerated as contemporary accounts have proven that no more than three to five thousand lost their lives.

The work went through many editions, and it was the source from which numerous English historians, including Mr. Froude, drew their evidence that the Irish Catholics perpetrated frightful atrocities at that time. When the 1679 edition appeared, it infuriated the Irish so much, that it was condemned by their Parliament to be burnt by the Common Hangman in Dublin." 1724 TEMPLE, John, Kt. 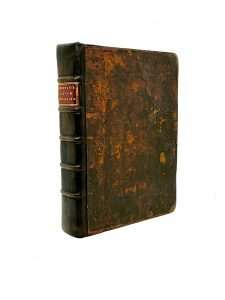