DE COURCY IRELAND, Dr. John. The Admiral from Mayo. A Life of Almirante William Brown of Foxford, Father of the Argentine Navy

DE COURCY IRELAND, Dr. John. The Admiral from Mayo. A Life of Almirante William Brown of Foxford, Father of the Argentine Navy. With coloured frontispiece, numerous illustrations and maps. 140 Dublin: By Éamonn de Búrca, for Edmund Burke Publisher, 1995. Blue papered boards, title in silver on spine. A fine copy in fine dust jacket. Very scarce. Back William Brown was born in Foxford, County Mayo in 1777. He pursued a career as a merchant seaman. Drawn into the maelstrom of Latin American politics in the dying days of the Spanish Empire, he rose to become one of the founding fathers of a new nation, Argentina, born from the bitter struggle of the people of the Plate Estuary to wrest democratic institutions and political independence from the decaying tyranny of colonial Spanish rule. A quintessential seaman, Brown was happiest on the deck of his ship, and his success in leading his crews to victory against enormous odds was founded on his constant concern for their welfare. In spite of his incredible record of naval success in a whole series of campaigns, Brown had to endure persecution, trial and imprisonment not once but several times in consequence of political intrigue. Nor did he forget the land of his birth, returning in the darkest days of the Famine to give money for relief and supporting O'Connell's campaign against the Union. The story of his dramatic and inspiring life, and the personal qualities that led him through every adversity to a tranquil and revered old age, is here told for Irish readers for the first time, in a book that crowns John de Courcy Ireland's life-long interest in the sea and its affairs. 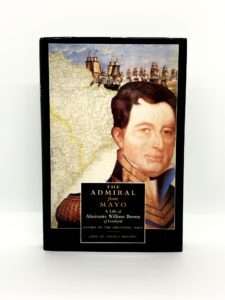