WARE, Sir James, Knt. The Antiquities and History of Ireland. 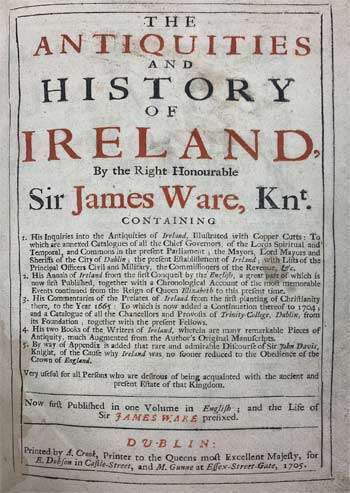 WARE, Sir James, Knt. The Antiquities and History of Ireland. Containing 1. His Inquiries into the Antiquities of Ireland, Illustrated with Copper cutts ... 2. His Annals of Ireland from the first Conquest by the English ... together with a Chronological Account of the most memorable Events continued from the Reign Queen Elizabeth to the present time. 3. His Commentaries of the Prelates of Ireland from the first planting of Christianity there, to the Year 1665 ... 4. His two Books of the Writers of Ireland ... 5. By way of Appendix is added that rare and admirable Discourse of Sir John Davis ... Very useful for all Persons who are desirous of being acquainted with the ancient and present Estate of that Kingdom. Now first published in one volume in English; and the Life of Sir James Ware prefixed.