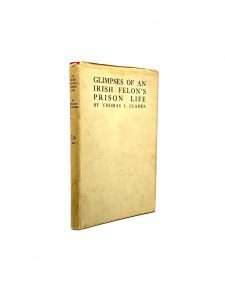 CLARKE, Thomas J. Glimpses of an Irish Felon’s Prison Life. With an introduction by P.S. O’Hegarty. Dublin: Maunsel & Roberts, 1922. Crown octavo. pp. xix, 104. Red cloth, titled in blind and in gilt. A fine copy in rare lightly frayed dust jacket. Scarce. Thomas J. Clarke (1857-1916), revolutionary, was born of Irish parents in the Isle of Wight. The family emigrated to South Africa, returned to Ireland and settled in Dungannon, when he was ten. He went to America in 1881, joined Clan na Gael, the American wing of the I.R.B. Two years later while

on a mission to England, Clarke was arrested and sentenced to penal servitude for life. He served fifteen and a half years under severe conditions and on his release and return to Ireland was made a freeman of the City of Limerick. Unable to get employment he emigrated to America in 1899, eight years later he returned home and with his savings opened a tobacconist’s and newsagent’s shop at 75A Great Britain Street (Parnell Street), where he set about reorganising the I.R.B. He was the first Signatory to the Proclamation of Independence of the Irish Republic, and was shot in Kilmainham Jail on 3rd May, 1916.