[IRISH LEADERS] An intriguing poster print, with a composition of photographs of De Valera

[COLLINS, Michael. De VALERA, Eamon & GRIFFITH, Arthur] Irish Leaders. An intriguing poster print, with a composition of photographs of Éamon De Valera (upper centre, in bow tie), Michael Collins and Arthur Griffith (left and right below), with a reproduction of the signature page of the Anglo-Irish Treaty of 1921, all within a green decorative border. No printer, no date [evidently 1921-1922], no title heading. Dimensions 44.5 x 30.5cms. Glazed and framed in gilt with a cream window mount, faint horizontal fold mark, else a fine copy. €950 A curious choice of photographs. Collins and Griffith supported the Treaty, while De Valera opposed it as soon as the terms were known. Perhaps it was intended to carry a headline such as ‘The Treaty Debate’, though no such heading is present. It is in any case exceedingly rare. 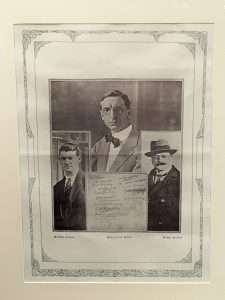