MARTIN, F.X. Ed. by. The Easter Rising, 1916 and University College, Dublin. Illustrated. 139 Dublin: Browne & Nolan, 1966. pp. viii, 130. Blue buckram, title in gilt along spine. A fine copy in a lightly frayed dust jacket. "The Easter Rising will always be associated with University College, Dublin, Pearse, The Commander-in-Chief of the Irish Forces, served for a period as deputy lecturer on the college staff, Thomas MacDonagh, another one of the seven signatories of the Proclamation of the Republic executed for their part in the revolt, was in a lecturer in England in the college at the time of the Rising. Eamon de Valera another prominent Commandant in the fighting, had been a student in the college. The O'Rahilly, one of the most heroic figures of the drama of Easter week, had likewise been a student there. The Irish Volunteers, who formed the main striking force of the insurrection, was founded in 1913 by Eoin MacNeill, a professor of the College.
Three of the younger members of the College staff - Michael Hayes, Liam O Briain and Miss Louise Gavan Duffy - threw in their lot with the rebels and lived to tell the tale. Students of the College also played a significant part: James Ryan, a medical student, and Joseph Sweeney, an engineering student, in the very modesty of their stories, recapture the idealism, humour and harsh realities of those momentous days.
The contributors include: Michael Hayes, Liam O Briain, James Ryan, Louise Gavan Duffy, Joseph A Sweeny and F.X. Martin." 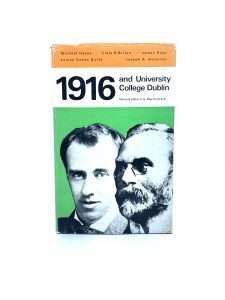