[DAIL EIREANN] Commemorative Poster of the First Dail Eireann, 1919. In the centre an illustration of the members, in the Mansion House, surrounded by medallion portraits of them all, within a Celtic border. With the arms of the Four Provinces and the City of Dublin also depicted. Dublin, MacLiam Eartnaill, 1919. 50 x 63cms. Framed & glazed. Very good condition. Rare.
The Dail was the Constituent Assembly of Ireland and first assembled on 21st January 1919, attended by Sinn Féin representatives who had been returned at the General Election the previous December. When the first Dail assembled at the Mansion House there were 27 Sinn Féin representatives present: thirty-four had been imprisoned since before the election, eight were unable to attend and Cathal Brugha was declared acting President in the absence of Éamon de Valera, President of Sinn Féin, who was in Lincoln Prison. Those present at the opening session approved the Constitution, the Declaration of Independence, and the Democratic Programme. 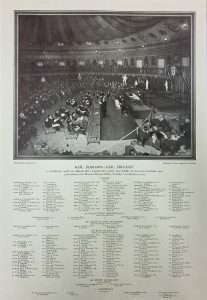