[CASEMENT, ROGER] Sir Roger Casement’s Last Speech from the Dock Done into Verse. The Ideal Recitation for Volunteers. Single sheet, newspaper folio, 49.5 x 33cms, printed one side only in
four columns, within black borders. Passed by Censor. Dublin: Independent Newspapers, 111 Middle Abbey St. No date, circa 1918. With a drawing of Casement in the dock. ‘The Last Speech of Robert Emmet is published uniform with this sheet, in the same metre and same price – Two pence’. A very good copy, mounted with protective mylar. Very rare in this condition.

‘The last speech of Sir Roger Casement is the only authentic apology of the men of Easter Week ... upon
being asked, if he had anything to say .. read the following statement, which for recitation purposes has been turned into verse, the author having managed .. not only to paraphrase almost every single sentence of the original, but to catch the spirit of the thoughts in the flow of the rhythm ... ‘My Lords and English Jurymen - I understand There is a law and custom in your land, Whenever you condemn a man to death, That he has privilege, with dying breath, Guilty, to plead for mercy or deny The charge if innocent .. Sirs, I refuse to plead to foreigners : but claim The natural right to vindicate my name. You may condemn me by your English laws : The victory will be mine, my Lords, not yours. I owe you no allegiance, nor your throne; No race can call me traitor save my own ...’  and so on, for about 300 lines of broadly Shakespearean blank verse, closely following the lines of Casement’s actual speech, after which he was duly condemned to hang. The speech makes no reference to the notorious Diaries, which were being circulated to opinion-formers before and during the trial. These versions have been ascribed to Sean (John Francis) McEntee [1889-1984], a Belfast-born Volunteer and later a long serving Fianna Fail Minister, who in his youth was a promising poe (see his Poems, 1918). We cannot vouch for the attribution, but it is plausible. The publication marks a remarkable change of policy for Independent Newspapers, which in the days after the Rising had continued to call for more executions. 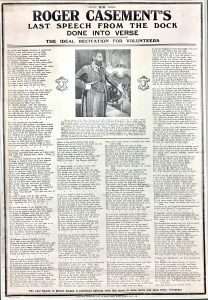