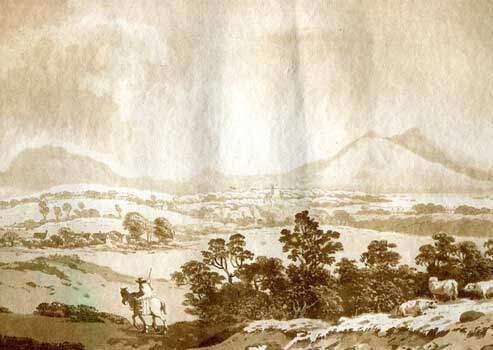 FISHER, Jonathan. A Picturesque Tour of Killarney: describing, in twenty views, the most pleasing scenes of that celebrated lake, accompanied by some general observations and necessary instructions for the use of those who may visit it; together with a map of the lake and its environs, engraved in aquatinta by Jonathan Fisher, and inscribed to the Right Honourable John, Earl of Portarlington. London: Printed by G. G. J. and J. Robinson, 1789. pp. 6, [1 (Map of the Lakes of Killarney)], 19 (plates). Lacking plate XVII, and titlepage. Oblong quarto. Loose in binder’s folder. In very good condition. Extremely rare.

Aquatint plates in sepia include: Map of the Lakes of Killarney; View of Killarney, The Lower Lake from River Flesk; Turk, Eagle’s Nest and Glena Mountain, Mucruss Abbey, part of the Lower Lake &amp; Village of Cloghreen; Mucruss Abbey, South; Turk Lake; Mucruss Peninsula, and the Lower Lake; Turk Cascade; Ross Castle, from the Causeway; Old Weir Bridge, N.E.; The Canal from the Old Weir Bridge to Crunnaglown Mountain; Glena Mountain, from the S.E. of the Old Weir Bridge; Eagle’s Nest; Esknamucky Cascade, the Long Range, with the Canal to Coleman’s Eye; Upper Lake; Slat House at Derrycunahy, the Cascade in the Distance; Derrycunahy Cascade; Old Smelting House at Derrycunahy, the Purple Mountain in the Distance; Ronayne’s Island, in the Upper Lake; O’Sullivan’s Cascade; Ross Castle, from a point of Ross Island; Dunlow Castle.

Jonathan Fisher (c.1740-1809) born in Dublin, was originally a woollen-draper in the Liberties, but took to the practice of art, in which he is said to have been self-taught. But as he appears to have visited England in early life he may have received instruction in London. He is first heard of in 1763, living in Dame Street, when he was awarded a premium for landscape by the Dublin Society. Around this time he moved to Great Ship Street, where he continued to reside until near the end of his life. He was certainly one of the more interesting landscape painters in late eighteenth century Ireland. He sent several pictures to the first exhibition of the Society of Artists, held in George’s Lane in 1765, and was a regular contributor to the various exhibitions down to 1801. In 1768 he gained another premium given by the Dublin Society for the best landscape. He was befriended and patronized by John, first Earl of Portarlington, himself an excellent landscape draughtsman and an amateur of the arts, who generally stayed in Fisher’s house in Ship Street when in Dublin. From about 1778 until his death he held the post of Supervisor of Stamps in the Stamp Office in Eustace Street.

Fisher’s works were views of actual scenery, and not the classical compositions which at that time were very popular. He achieved great success through his several series of engraved views, by which only he is now remembered. In 1770 he published six large views of Killarney, engraved from pictures by himself by various artists in London. In 1789 appeared an oblong folio volume, ‘A Picturesque Tour of Killarney’, describing in twenty views the most pleasing scenes of that celebrated Lake. The book was dedicated by the artist to his friend and patron John, Earl of Portarlington.

In or soon after 1805 Fisher moved from Ship Street to No. 12 Bishop Street, where he remained until his death which took place in early 1809. In his Will he left to his friend Jeremiah D’Olier his ‘Picture of the Artist Club’ in caricature, painted by Ennis; to Henry Gratten “who has lived with me for many years”, all his painting materials, etc. The remainder of his collection was sold by auction under the direction of Graham at his home in Bishop Street. Fisher married a Miss Price, “a handsome, clever and fine-looking woman”.