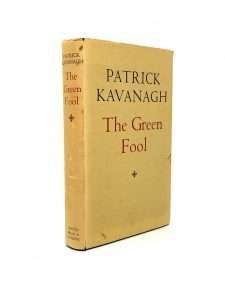 KAVANAGH, Patrick. The Green Fool. London: Martin Brian & O'Keeffe, 1973. Second edition. pp. 350. Black cloth, titled in gilt. A fine copy in lightly-frayed price-clipped dust jacket. "Patrick Kavanagh (1904-1967) farmer, shoemaker, poet and novelist was born at Iniskeen, County Monaghan and educated locally. His first book 'Ploughman & Other Poems' was published in 1936. Today he is recognised as a major Irish poet with universal appeal and is the subject of numerous studies.
Shortly after the publication of the first edition of 'The Green Fool' in 1938, Oliver St John Gogarty brought and won a libel action against the publisher, Michael Joseph. Gogarty was still smarting from a libel action which he had lost the previous year (in a case in which Samuel Beckett had given evidence for one of the plaintiffs). The passage to which Gogarty took exception seems today innocuous enough. Kavanagh, on his first visit to Dublin, called on various literary figures, and he described his reception at Gogarty's house as follows - ""I mistook Gogarty's white-robed maid for his wife - or mistress. I expected every poet to have a spare wife."The book was withdrawn and Gogarty was awarded damages of £100.Michael Joseph wrote a blurb for the first edition: "This is one of those rare books which it is difficult to describe with restraint. We are tempted to use superlatives, but content ourselves with saying that we consider it one of the best books which has yet appeared under our imprint."