KHAYYÁM, Omar. Rubáiyát of Omar Khayyám. Rendered into English Verse by Edward Fitzgerald. Illustrated in Colour and in Line by René Bull.

ONE OF THE MOST MAGNIFICENT ILLUSTRATED BOOKS

OF THE GOLDEN AGE OF ILLUSTRATION IN SUPERB BAYNTUN BINDING 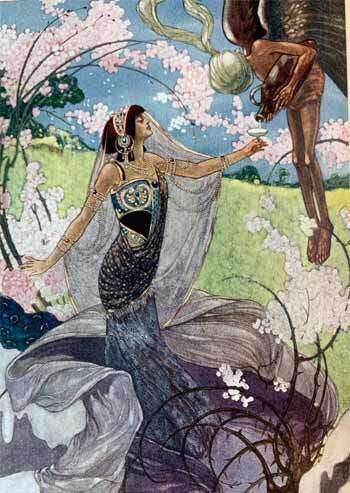 KHAYYÁM, Omar. Rubáiyát of Omar Khayyám. Rendered into English Verse by Edward Fitzgerald. Illustrated in Colour and in Line by René Bull. London: Hodder and Stoughton, [1913]. Large quarto. pp. [78], [10 tipped-in colour plates within gilt printed frames with captioned tissue guards]. Nineteen mounted colour plates as headpieces, decorations; line drawings printed in blue. First edition with these illustrations. Bound by Bayntun of Bath (name stamped on verso of front endpaper) in full polished crimson morocco, covers framed by double gilt fillets enclosing on the upper cover a goblet encircled by a coiled snake in gilt. Spine divided into six panels by five gilt raised bands, title and illustrator in gilt on green morocco labels in the second and fourth, the remainder elaborately tooled in gilt and with the chalice and Snake, bunch of grapes in gilt in centre of remaining panels; board edges ruled in gilt; gilt floral turn-ins; marbled endpapers; red and gold endbands. All edges gilt. A fine copy and superb example from this renowned bindery.

Edward Fitzgerald (1809-1883), poet and translator; educated at Bury St. Edmunds and Trinity College, Cambridge, where he graduated in 1830. He has been described by Benson as "a literary recluse of Irish origin, son of a member of Parliament of great wealth and position as a landowner". A great friend of Thackeray, Tennyson, Spedding and Carlyle, he first published his translation in 1859, which is the text reproduced here. Fitzgerald managed to convince Bernard Quaritch to put his imprint on the wrappered volume; finding he could not sell it, Quaritch relegated it to a stall in St. Martin's Lane. It came to the attention of Rosetti and Swinburne who bought them for a penny apiece. Having gone through four editions in the author's lifetime and thousands since his death, its immortality was ensured by its popularity with the public as one of the most quoted poems of all time.

Omar Khayyam the eleventh-century mathematician, astronomer and poet was born at Naishapur in Persia. The political events of that time played a major role in the course of his life. A literal translation of the name Khayyam means 'tent maker' and this may have been the trade of Ibrahim, his father. Omar studied philosophy at Naishapur and one of his fellow students wrote that he was "endowed with sharpness of wit and the highest natural powers".  Renowned in his own country for his scientific achievements, in the English-speaking world he is chiefly known for the collection of rubaiyat or quatrains translated by Edward Fitzgerald.

Another copy of the 'Rubaiyat of Omar Khayyam', affectionately known as the 'Great Omar', executed at the renowned craft bookbinding firm of Sangorski and Sutcliffe, took over two years to create. Bound in full green goatskin and boasting 1,000 precious and semi-precious stones and 1,500 separate pieces of leather, it was lost when it went down with the 'Titanic' in 1912. It now lies at the bottom of the Atlantic in an oak casket.

René Bull (1872-1942) Illustrator and photographer was born in Dublin to a French mother and an English father. He went to Paris to study engineering, but embarked on an artistic career after meeting and taking drawing lessons from the French satirist and political cartoonist Caran d'Ache (Emmanuel Poiré). Bull returned to Ireland to contribute sketches and political cartoons to various publications, including the 'Weekly Freeman'. Moving to London in 1892, He drew for "Illustrated Brits" and created cartoons in the style of Caran d'Ache for 'Pick-Me-Up' from 1893. In 1896 he joined Black and White illustrated newspaper as a special artist and photographer. In 1898, he covered the Tirah Campaign in India and went on to Sudan for the campaign culminating in the Battle of Omdurman. Then he went to South Africa to record the Boer War until the relief of Ladysmith in March 1900. As he was wounded in 1900, Bull was invalided out. He settled in England and drew cartoons for such magazines as Bystander, Chums, London Opinion, Lika Joko. In The Sketch Bull created cartoons of humorous inventions, predating those of William Heath Robinson. From 1905 he illustrated books, starting with an edition of Fontaine's 'Fables'. Other major titles he illustrated included The Arabian Nights (1912), and The Rubáiyát of Omar Khayyám (1913). In 1914, Bull joined the Royal Naval Volunteer Reserve as a lieutenant and was eventually transferred to the Royal Air Force where he reached the rank of Major. In World War II Bull joined the Air Ministry for technical duties.